Man behind the mask 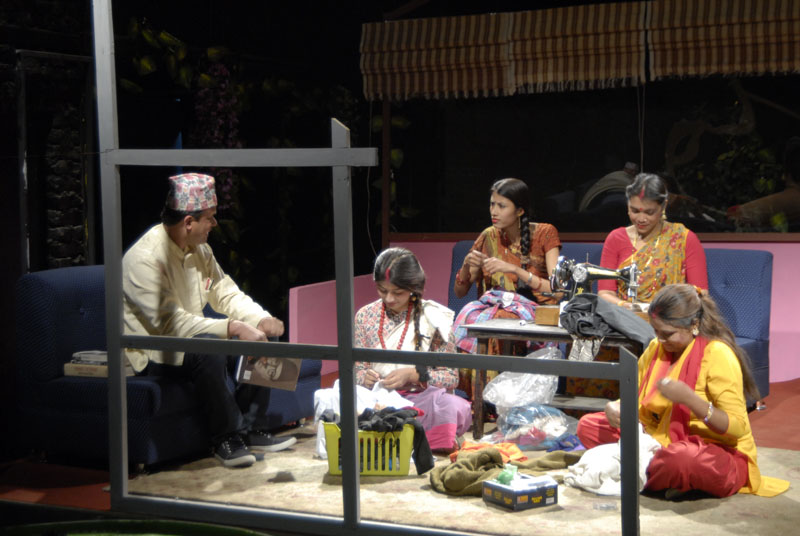 Photo: THT
Kathmandu People who set examples in the society can sometimes turn out to be wearing a mask. When the society tries to unmask such people, reality unravels through their reaction. The play Samaj Ka Naike, a translated text of Norwegian playwright Henrik Ibsen’s The Pillars of Society tries to bring forth that reaction of such hypocrites. Translated into Nepali by Dr Shiva Rijal and directed by Ghimire Yubaraj, the play narrates a story of a businessman Mohan Kumar Chaudhary (Harihar Sharma). Chaudhary is a wealthy businessman. But that success is based on dishonest business dealings. People unaware of this fact regard him a man of high morals. After all, he is a respected man married to Kadimbini (Pabitra Khadka). As the story unfolds, the audience realise that all that glitters is not gold, they find out that he did something wrong in the past. Instead of Chaudhary being caught there is a scapegoat — Kadimbini’s brother Kundan (Badal Bhatta). The play takes a new turn after the arrival of Kundan and Rekha Dixit (Aruna Karki) in the house. Chaudhary was in love with Rekha, step sister of Kadimbini, before marriage. To know what happens next audience must have a lot of patience to watch this two-hour-long play. The play is special as veteran theatre actor Sharma has made a comeback in theatre through this. His natural performance, the glow in his eyes, his stupidity and restlessness all are visible through his powerful acting as Chaudhary. Meanwhile, Deshbhakta Khanal in the role of a mechanic too is appealing. His brief appearance in the play attracts the audience as he is able to show how people are manipulated by businessmen. Karki too steals the show with her confident dialogue delivery and acting. However, had a younger boy enacted the role of Suraj (Sabin Kattel) it would have been more realistic. As for set designing, papers cut in different shapes to show balcony is a wise idea. The dialogues relevant to Nepali context won’t make one feel that it is a translated text. If the play’s duration had been a little shorter, it would have been better. But it is good to take out some time to watch the play as actors like Sharma and Khanal rarely come on stage together with the young actors. The play is being staged at Shilpee Theatre, Battisputali till February 26 at 5:00 pm every day except on Tuesdays.
#Samaj Ka Naike #The Pillars of Society
Stay in touch!