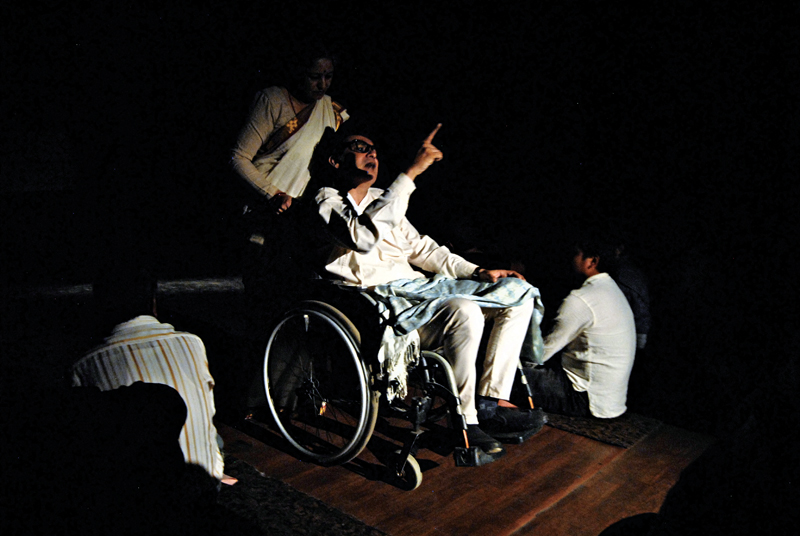 Photo: Bal Krishna Thapa/ THT
KATHMANDU: Putting together the political, literary and personal life of a personality as charismatic as Bisweshwor Prasad (BP) Koirala and doing justice on stage is a real challenge — but Sandajuko Mahabharat team has overcome the challenge thus staging an impressive two-hour production. Based on the life and works of the first democratically elected prime minister of Nepal, Sandajuko Mahabharat is sure to provide new experiences to theatre lovers — due to its text, unique stagecraft and of course, a brilliant cast. Written by Prof Dr Abhi Subedi, the play directed and designed by Bimal Subedi, is being staged at Theatre Village, Lazimpat from September 10.

Photo: Bal Krishna Thapa/ THT
Sandajuko Mahabharat begins with the mention of the epic Mahabharat battle as seen by the women characters of Koirala’s novel Modiain. Then the Ekal Sutradhar (single choric commentator played by Salil Subedi) starts unfolding the life and works of Koirala alias Sandaju (Sanjeev Kumar Upreti). There are moments describing and displaying his fight for freedom of Nepali people — in prison, court, exile, during various political agreements, even during his conversation with Sushila Bhauju (Suryamala Sharma) and other eminent political personalities of that time. While doing so, Sutradhar claims to have used Koirala’s court statements when king Mahendra jailed him in 1960. Thus, the court has become an important subject here — Sandaju often appears in the court during the play. In addition, the playwright has woven the story sourcing important stances from Koirala’s famous literary works like Teen Ghumti, Ek Raat, Swet Bhairavi among others.

Photo: Bal Krishna Thapa/ THT
This play does not have a linear storyline — the political and literary characters do not appear on stage in an order. And this play is a treat for those who know about Koirala, but those who have not read or understood Koirala, may get lost in the play. Nonetheless, the Sutradhar plays a very important role to keep the audience in the loop — by linking Sandaju’s stories and to some extent analysing them. This play rides much on the Sutradhar and Salil ensures its success with his notable performance — his powerful commentaries and alike gesture together with musical pieces produced by didgeridoo, murchunga, and bin. Upreti may not have much physical resemblance to the photos of Koirala hung outside the theatre, but you forget it once Upreti transforms himself into the leader effortlessly. Be it as an imprisoned politician, a minister, writer or a husband, he portrays Koirala’s multiple facets in diverse moods diligently. Sharma is elegant as Sushila Bhauju — giving glimpses of a politically aware woman of that time.

Photo: Bal Krishna Thapa/ THT
The other actors appear in more than one roles but have justified their respective characters. Among them, Divya Dev — be it when he recites a poem as Pahalman Subedi or other dialogues — is something you fall for. Saroj Aryal as a bourgeois ruler and the then prime minister Mohan Shamsher — gives you comic relief when too many serious issues are being raised. It is interesting to see Pradip K Chaudhary as the legendary Ganeshman Singh. Subedi’s stage design cannot be forgotten — from the moment you line up to enter the theatre, there is something to look forward too. As you enter, the two net metal frames on both sides of the seating area make you wonder, then the lights above the seating area, the duna (leaf plates) hung from the ceiling above the stage give a different feel. As the play starts, an image moves across stage’s rear wall, then there is a unique use of bicycles in Mohan Shamsher’s part with wearing headlights on their foreheads, the multi-purpose ladders, et cetera, provide a visual spectacle. The play is being staged everyday till October 10 except on Wednesdays.
#Kathmandu #Lazimpat #Theatre Village #Bisweshwor Prasad (BP) Koirala #Sandajuko Mahabharat team #Prof Dr Abhi Subedi #Koirala’s famous literary works #Teen Ghumti #Ek Raat #Swet Bhairavi
Stay in touch!