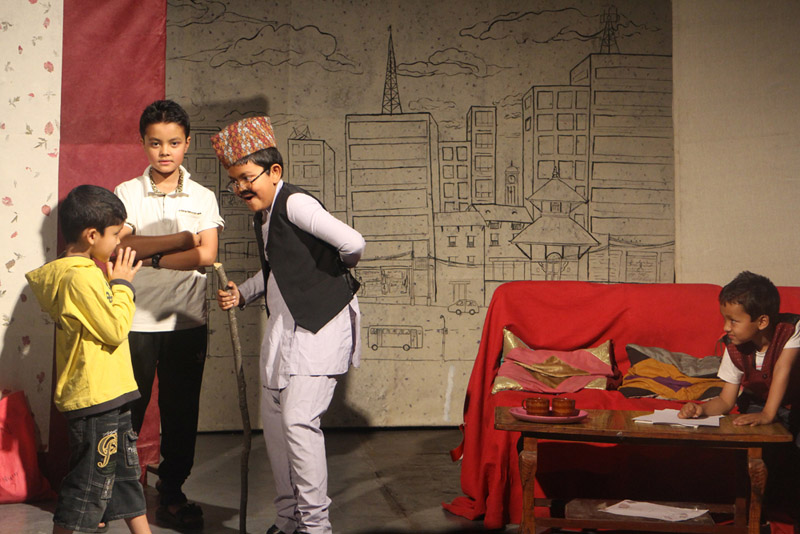 Children performing in a play Bhitta Ko Namaste, at Theatre Mall, Sundhara on April 16. It was staged at the closing ceremony of a 15-day acting and theatre workshop organised by Theatre Centre for Children Nepal and Theatre Mall. Courtesy: Kedar Shrestha
KATHMANDU: If you love to stage short and sweet plays, but do not have much experience, then Sarwanam Theatre is all ready to cater to your needs. Make a play not more than 10 minutes long and be a part of the ‘10 Minute Drama Festival’. Sarwanam is organising the nationwide ‘10 Minute Drama Festival’ in the fourth week of May, informed a press release issued by the theatre group. “The festival that is being organised since last year aims to provide right destination and medium to those interested to showcase their talent in the theatre,” the press statement quoted Asesh Malla, Artistic Director of Sarwanam Theatre as saying. Rather than experience and competency, the plays reflecting hard work and imagination will get priority in the festival. Anyone, be it an individual or a group, can take part in the festival, the press statement further added. Malla was further quoted as saying, “In order to incorporate the new generation — that is interested in theatre but can’t stage a play in the absence of space — in theatre, we are putting forth this festival.” Register your play at Sarwanam Theatre, Kalikasthan by the third week of May, and be a part of the festival.
#Sarwanam theatre #10 Minute Drama Festival
Stay in touch!