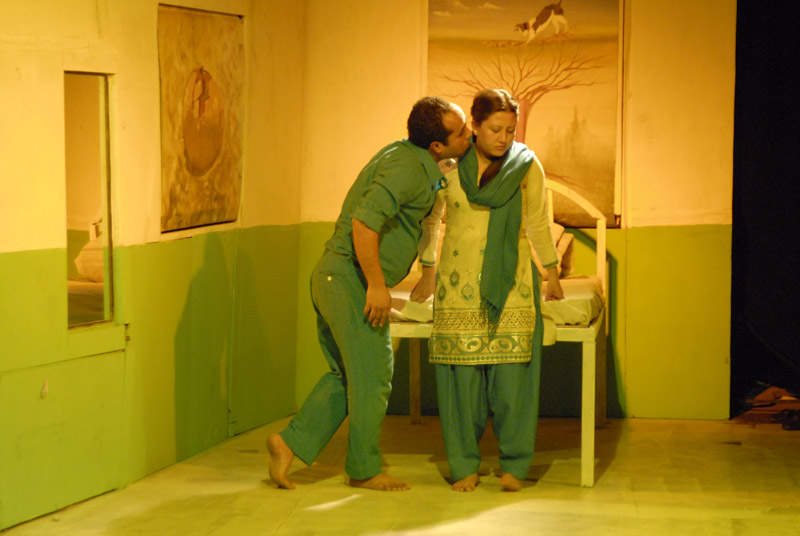 Photo: Naresh Shrestha/THT
Kathmandu Billagates Pandit aka Dhana Prasad Pandit (Bijay Baral) is a theatre actor. He wants to excel as an actor. All he wants is to act and live happily with his artiste-turned-government employee wife Aradhana (Srijana Adhikari) who is in love with him. But he doesn’t make much money for living as an actor. However, life doesn’t go as planned and his dreams and desires are shattered. Telling this story of unfulfilled dreams is director Sulakshan Bharati’s Billagates Pandit at Mandala Theatre from February 19. Like the story, the play is also not complete. The narration and story of Billagates Pandit is weak and bland. Had a little effort been put in narrating the story and presenting the characters as per the requirement, it would have been a nice watch. One scene doesn’t link to another to give a complete picture of the story — the play lacks coherence. Yet one can interpret that these incoherent scenes might reflect the mental state of its lead character with schizophrenia. Baral plays a schizophrenic patient and has tried his best to fit in the shoes of one with delusion. He has got into the skin of the character. His repetitive behaviour and unorganised speeches indeed make him look like a man with schizophrenia. But repetitiveness in both acting and dialogue delivery doesn’t entertain one much. Adhikari too doesn’t charm the audience with her role. She rather irritates the audience with her fights with Baral. The only thing that catches audience’s attention is the technique of informing the audience of dos and don’ts inside the theatre and information of the play’s end. The play is being staged everyday at 5:15 pm except on Mondays till March 13.
#Mandala Theatre #Billagates Pandit
Stay in touch!