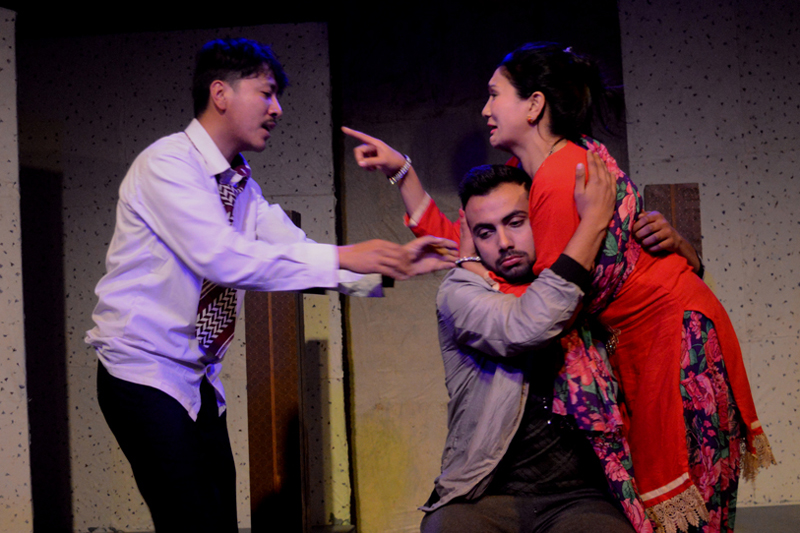 A scene of 'Maan Vs Mati' being staged at the Theatre Mall in Kathmandu. Photo: Theatre Mall

KATHMANDU: A frustrated husband comes home after a tiring work day while his wife is stuck in front of the 'idiot box' watching soap operas.  He feels his wife does not pay attention to him.

Soon the couple get involved in spats with each other. The husband tries to fix the problems and take his wife out for a meal. This does nothing good for them as they do not stop quarrelling. Later, she turns suspicious when her friends begin to praise her husband.

This is the plot of a play 'Maan Vs Mati' directed by Kedar Shrestha, which is being staged at the Theatre Mall in the Capital.

The play revolves around the Nepali proverb 'Budadudi ko jhagada paralko aago' and set in a middle-class family.

Through the drama, Shrestha has tried to comment on the trend of housewives who watch Hindi soap operas and turn suspicious towards their husbands.

Akash Magar has played the role of husband and Prembarsha Khadka has played the wife. The family has two other members: the couple's young son and the man's younger brother.

Played by Kushal Pandey, the brother is a heavy metal music fan, unemployed and he adds fuel to the fire by making them feel suspicious about each other.

According to a press statement issued by the Theatre Mall today, the play aims to show that the recurrent friction between couples can easily turn into something nastier and outsiders will find it easy to create trouble for them.

"The problem of unemployment and its repercussions among the youth is also represented by Pandey. Our patriarchal society is tackled by showing that women should not be confined to household chores alone," read the statement.

"I prepared the script based on the incident I heard from a friend while we were travelling on a bus."

The 70-minute play will be staged till March 18.