ALL BUSINESS: Credit-card rates up before new law 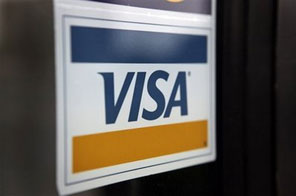 FILE - In this July 29, 2009 file photo, a Visa sticker is shown at a business in Detroit. Visa says it turned a profit in its fiscal fourth quarter, as cost cutting and growing debit-card use made up for a decline in payment volume reflecting consumers' spending cutbacks. Source: AFP

NEW YORK: Have you checked the interest rates on your credit cards lately? Odds are they're going way up.

That's because credit-card companies are rushing to raise rates and tack on extra fees ahead of a law slated to take effect Feb. 22 that is supposed to limit such moves in the future. In some cases, rates are doubling to as high as 30 percent or more, even for people who pay their bills on time.

The current maneuvering by the card companies is serving up another blow to American consumers who are already struggling with their finances. U.S. lawmakers let that happen by giving the card companies nine months to prepare for the rules.

"The delay allowed them to restock their arsenal with weapons," said Lloyd Constantine, an attorney who has spent 22 years litigating cases tied to the credit-card industry and is the author of the new book "Priceless: The Case that Brought Down The Visa/Mastercard Bank Cartel."

It's hardly surprising that banks and other credit-card issuers would use a grace period afforded to them by Congress to their advantage.

The changes required under the Credit Card Accountability, Responsibility and Disclosure Act, or CARD Act, could go a long way to stop deceptive practices in the card industry. But before that happens, card issuers are grabbing what they can from the millions of Americans who are their customers.

Constantine is one of them. The interest rate on his Chase Visa card doubled to 17 percent earlier this month. He got a notice announcing the change and couldn't figure out why. Constantine, who has a high net worth, rarely uses the card, and when he does he pays his bill on time.

Come late February, the CARD Act will prohibit lenders from raising rates on outstanding card balances. In other words, if you have a balance of $1,000 and the company wants to change your rate, it only applies to new purchases. It wouldn't be retroactive on old debt.

Card issuers also won't be able to change the terms of a contract so long as the cardholder makes a minimum payment on time.

The rules ban a practice known as "universal default." That's where lenders raise a cardholder's interest rates when that person misses payments to other creditors or takes on new debt like a mortgage or a car loan.

The card companies lobbied Congress hard for the delay. They argued they needed the time to overhaul their computer systems, craft new sales' pitches and rewrite disclosure documents to be sent to customers.

While all that may be true, the facts indicate that they are using the time for something else.

Even though interest rates set by the Federal Reserve are at historic lows which has let banks and other issuers borrow cheaply cards have become more costly for Americans, according to research released Wednesday from the Pew Charitable Trusts' Safe Credit Cards Project.

The nonprofit organization found that credit-card companies boosted interest rates on new cards by an average of 20 percent from January to July. That data doesn't include increases over the last four months when many lenders stepped up their pace of raising rates and fees.

Representatives of the card business say the increases reflect the realities of the recession, not an attempt to gouge customers. The weak economy means a greater risk that all cardholders could potentially default, said Scott Talbott, senior vice president of government affairs for the Financial Services Roundtable, an industry group.

Banks and other card issuers have been seeing more late payments, and industry forecasts call for at least 10 percent of cardholders to default on their unpaid bills.

Now U.S. lawmakers are waking up to what they let the card companies do.

The House Financial Services Committee recently introduced legislation to move up the effective date for the credit card law from February to Dec. 1. But Federal Reserve Chairman Ben Bernanke, while acknowledging that change would benefit consumers, rejected the idea. He said it would force the Fed to implement provisions of the new law without adequate public comment and could lead to "unintended consequences."

There have been bills introduced in both the House and Senate to immediately freeze interest rates on existing balances for the estimated 700 million credit cards in circulation.

"We worked long and hard to enact the safeguards included in the Credit CARD Act," Sen. Chris Dodd, a Democrat from Connecticut who had introduced the bill in 2004, 2005 and 2008 before successfully passing last spring, said in a statement. "But as soon as it was signed into law, credit card companies were looking for ways to get around the protections this Congress and the American people demanded."

His spokesman declined further comment about why Congress is being so aggressive with its actions now. Too bad they couldn't see this coming a lot earlier.

#ALL BUSINESS: Credit-card rates up before new law
You May Also like: