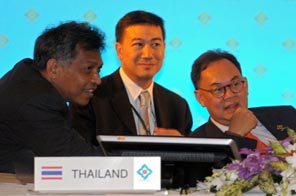 HUA HIN: East Asian nations are to carry out a feasibility study for a huge free trade zone, officials said at a summit Saturday, as the region tries to sustain its rebound from the global crunch.

Leaders of the 10-member Association of Southeast Asian Nations (ASEAN), plus regional partners China, Japan and South Korea, would discuss details of the study at meetings in the Thai beach resort of Hua Hin, they said.
A separate study for a wider economic partnership also covering India, Australia and New Zealand would also be carried out in tandem, the officials said.
"We're going to do this two-pronged, meaning in parallel," Vitavas Srivihok, director general for ASEAN affairs at the Thai foreign ministry, told AFP.
"Right now we (ASEAN) have bilateral free trade agreements with all six countries completely. Now we should explore a feasibility study both in the East Asia Free Trade Area and with (India, Australia and New Zealand)," he said.
Asia's quick rebound from the global recession compared with the United States and other Western economies has prompted calls for the region to increase integration.
Japan's new Prime Minister Yukio Hatoyama has made a proposal for an East Asian community and said in a newspaper interview published Saturday that it should aspire to lead the world.

#ASEAN to study free trade pact: officials
You May Also like: