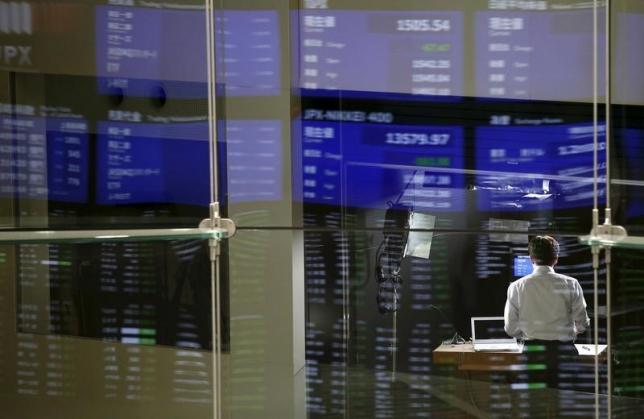 Market prices are reflected in a glass window at the Tokyo Stock Exchange (TSE) in Tokyo August 24, 2015. REUTERS
TOKYO: Asian shares were largely lower on Thursday after more dour economic news in China and the United States piled pressure on riskier assets. Spreadbetters expected Britain's FTSE, Germany's DAX and France's CAC to open slightly lower on continuing fallout from the Volkswagen diesel emissions scandal. Worries that an eventual tightening in US monetary policy and slower growth in China could knock the global economy have scared off investors, particularly those invested in stocks and commodities. MSCI's broadest index of Asia-Pacific shares outside Japan lost 0.2 percent after having posted their biggest single-day fall in almost a month the previous day. Shanghai shares trimmed a chunk of early gains and were up only 0.3 percent as of 0511 GMT, reflecting how investor confidence in the economy remains wobbly at best, while South Korea's Kospi nudged up 0.2 percent. Hong Kong's Hang Seng shed 1 percent. Japan's Nikkei average, opening for the first time since Friday after a string of national holidays, tumbled 2.2 percent, edging near its seven-month low touched earlier this year. Shares of Japanese automakers sagged in a delayed reaction to the Volkswagen scandal. The scandal has raised fears among economists that it could develop into a major threat to Europe's largest economy. Wall Street also lost ground on Wednesday, dragged down by economic reports portraying US factory growth as tepid and China in its worst manufacturing contraction since the global financial crisis. "Investors will be cautious for the time being. Markets will become steadier only when uncertainties over Chinese economy and the U.S. monetary policy diminish," said Masahiro Ichikawa, senior strategist at Sumitomo Mitsui Asset Management. Although shares in Volkswagen rose 5.2 percent on Wednesday, they had lost about a third of its value in the previous two sessions. In the currency market, the euro was helped by comments from European Central Bank President Mario Draghi that the bank needed more time to decide on whether further stimulus is required. The euro rose to $1.1193, having bounced back from three-week low of $1.1105 touched on Wednesday. The spectre of higher US interest rates and slower growth in China continues to weigh on many emerging market currencies, however. The Brazilian real sank to an all-time low of 4.179 per dollar, clobbered by a recession, fiscal deficit and political instability following corruption allegations against leading politicians in Brazil, which has the world's seventh largest economy. The Australian dollar, often used as a proxy for China-related trades, struggled near a two-week low of $0.6989. "Unfortunately for Australians, the lack of desire to own the currency has more to do with external than domestic factors. The primary source of weakness stems from China, the country's largest trading partner," wrote Kathy Lien, managing director of FX Strategy for BK Asset Management. The yen has been stuck in a narrow trading range over the past week and last stood little changed at 120.00 to the dollar. Oil prices slipped toward the lower end of their trading ranges in the past week as the bullish impact from lower crude inventories was offset by large gasoline builds that raised concerns about high autumn fuel supplies. Brent futures crawled up 0.5 percent to $47.97 per barrel, after having lost 2.7 percent on Wednesday. Platinum, used in catalytic converters to clean up exhaust emissions, slid to its lowest level in more than 6-1/2 years on Wednesday on fears about reduced demand from the auto sector. It last stood at $944.85 per ounce, having fallen to as low as $924.50.
#United States #China #Asian shares
You May Also like: