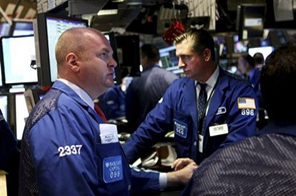 BANGKOK: Asian markets drifted lower Wednesday as dollar weakness hit exporters while commodity stocks gained on a jump in oil and gold prices. European shares were lower.
The U.S. dollar was hovering near lows for the year against the euro and a two-month low against the yen after sinking Tuesday. Oil prices, which jumped more than $3 a barrel overnight, held above $71. Gold kept its nose above $1,000 an ounce after rising above that mark the previous day for the first time since February.
Following a string of gains triggered by big merger announcements and the Group of 20's pledge to maintain stimulus efforts, investors were again doubting the strength of recovery from the global recession.
"The market has risen too much in the last few days. The momentum is now very weak. In the coming days the downside risk is very high and the upside risk is low," said Peter Lai, investment manager at DBS Vickers in Hong Kong.
Weakness in the dollar is likely to continue pushing up the price of gold, said Lai, since it makes the precious metal more affordable in other currencies. Gold is often regarded as an investment safe haven and hedge against inflation.
The dollar edged up to 92.48 yen from 92.26 yen late Tuesday, while the euro fell to $1.4483 from $1.4488.
Automakers and other exporters in Japan and South Korea got hit amid worries that the weaker dollar will erode their overseas earnings. The Nikkei 225 stock average was down 81.09 points, or 0.8 percent, at 10,312.14, while South Korea's Kospi retreated 0.7 percent to 1,607.77.
Toyota Motor Corp., the world's biggest carmaker, was down 1.8 percent and electronics giant Sony dropped 2.2 percent. Hyundai Motor Co. shed 5.8 percent in Seoul.
In Hong Kong, the Hang Seng declined 218.77, or 1 percent, to 20,851.04. China's benchmark Shanghai index recovered losses to gain 15.78, or 0.5 percent, to 2,946.26.
Australia's main index closed fractionally lower amid news retail sales weakened in July.
Miners and other commodity producers got a lift from rising oil and gold prices. Gold miner Newcrest Mining gained 1.5 percent in Sydney and Thai energy conglomerate PTT PCL rose 1.6 percent in Bangkok.
As trading got underway in Europe, Germany's DAX was off 0.3 percent, France's CAC 40 fell 0.2 percent and Britain's FTSE dropped 0.3 percent.
After a long weekend, the Dow Jones industrial average rose 56.07, or 0.6 percent, to 9,497.34 on Tuesday. The broader Standard & Poor's 500 index rose 8.99, or 0.9 percent, to 1,025.39, and the Nasdaq composite index rose 18.99, or 0.9 percent, to 2,037.77.
Stock futures pointed to losses Wednesday on Wall Street. Dow futures fell 44, or 0.5 percent, at 9,452 and S&P futures slipped 5.1, or 0.5 percent, to 1,020.
Benchmark crude for October delivery was down 4 cents to $71.06 a barrel by late afternoon Singapore time in electronic trading on the New York Mercantile Exchange. On Tuesday, the contract gained $3.08 to settle at $71.10, pushed higher by a weakening dollar.

#Asian markets lower as exporters fall; Europe down
You May Also like: