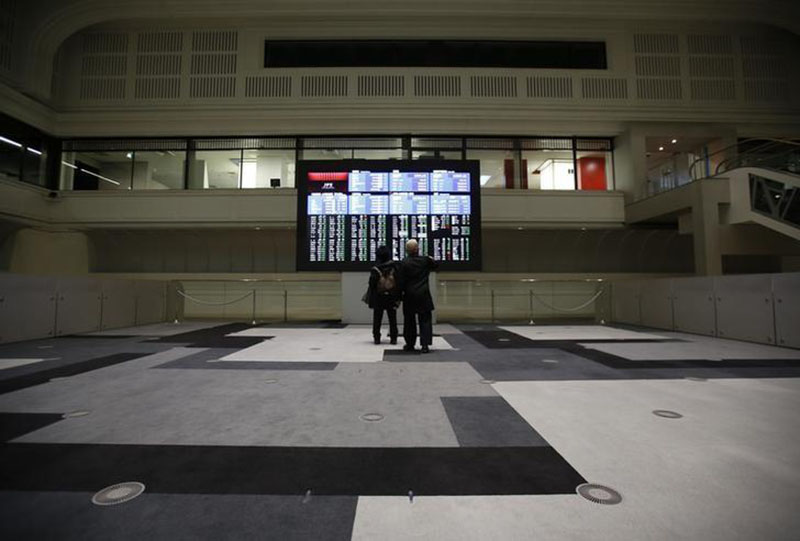 Visitors looks at an electronic board showing the Japan's Nikkei average at the Tokyo Stock Exchange (TSE) in Tokyo, Japan, on February 9, 2016. Photo: Reuters
TOKYO/SINGAPORE: Asian shares fell on Monday while the dollar held firm near seven-month high after comments from Federal Reserve Chair Janet Yellen that signalled the need for aggressive steps to rebuild the US economy boosted long-dated bond yields. European shares also looked set for modest early losses, with financial spreadbetters predicting Britain's FTSE 100 , Germany's DAX and France's CAC 40 would all open down about 0.2 percent. US stock futures fell 0.3 percent. In Asia, MSCI's broadest index of Asia-Pacific shares outside Japan dropped 0.5 percent, with Hong Kong's Hang Seng hitting 1-1/2-month lows. Japan's Nikkei closed up 0.3 percent, aided by a weaker yen. On Friday, US stocks surrendered earlier gains to close flat following Yellen's comments that the Fed may need to run a "high-pressure" economy to reverse damage from the global financial crisis that depressed output. Speculation that she may prefer to keep an easy monetary policy stance for a long time even if inflation exceeds the Fed's 2 percent target drove the 30-year bond yield to a four-month high of 2.565 percent. It last stood at 2.5512 percent. "Markets are reacting to the possibility that the Fed might join the Bank of Japan in conducting policy to steepen the yield curve," Ric Spooner, chief market analyst at CMC Markets in Sydney, wrote in a note. "In the Fed's case, this might amount to running the gauntlet of higher inflation with a very slow pace of monetary tightening." And inflation appears to be picking up. The US producer price index for final demand increased 0.3 percent last month. In the 12 months through September, the PPI jumped 0.7 percent, the biggest increase since December 2014. A gauge of investors' inflation expectations for the US, the breakeven inflation rate based on inflation-linked bonds , rose to its highest level in about five months. Investors are awaiting a raft of global economic data this week, including US industrial production on Monday; US and UK consumer prices, and UK producer prices on Tuesday; and Chinese third-quarter gross domestic product on Wednesday. The European Central Bank will also hold its policy meeting on Thursday and Eurozone consumer confidence data for October is due on Friday. China's CSI 300 index fell 0.6 percent, while Hong Kong's Hang Seng slid 0.9 percent, after earlier falling to the lowest since Sept. 1. China's economy likely grew 6.7 percent in the third quarter from a year earlier, the same pace as the previous quarter, as increased government spending and a property boom offset stubbornly weak exports, according to a Reuters poll of 58 economists. But analysts are increasingly worried that China's growth is becoming too reliant on government spending, ballooning debt levels and a housing market that is showing signs of overheating. On Friday, China reported higher-than-expected inflation in September for consumers and producers alike, with producer prices rising for the first time since January 2012. Oil prices, which have risen for four straight weeks, have helped drive the pickup in inflation globally. US crude futures fell 0.5 percent to $50.10 per barrel. Brent crude futures stood at $51.81, down 0.3 percent. Some market players are wary of a possible hit to investors' risk appetite after Iraq's Prime Minister Haider al-Abadi announced the start of an offensive to retake Mosul, the capital of Islamic State's so-called caliphate in Iraq. Elsewhere in markets, higher bond yields boosted the dollar to its largest weekly rise against a basket of six major currencies in more than seven months last week. The dollar index touched a high of 98.169 on Monday, and last stood at 98.064. The euro, which touched a 2 1/2-month low of $1.0964 earlier on Monday, rose to $1.09845. The yen traded at 104.22 per dollar, near its 2 1/2-month low of 104.635 touched last Thursday. The Thai baht weakened 0.1 percent as Thailand has sought to dispel any concern about a royal succession after Crown Prince Maha Vajiralongkorn said he would delay his ascension to the throne while he mourns his father. "The passing of King Bhumibol has great significance, and Thailand will not only be entering a period of mourning, but one of dynamic changes and political uncertainty," said Mark Mobius, executive chairman of Templeton Emerging Markets Group. "Under such circumstances, market observers will be looking out for potential issues over political friction and royal succession, and investors should be prepared for volatility. In the long run however, we believe the market uncertainty will ultimately be outweighed by Thailand's strong fundamentals," he said.
#US economy #Asian shares #Yellen comments
You May Also like: