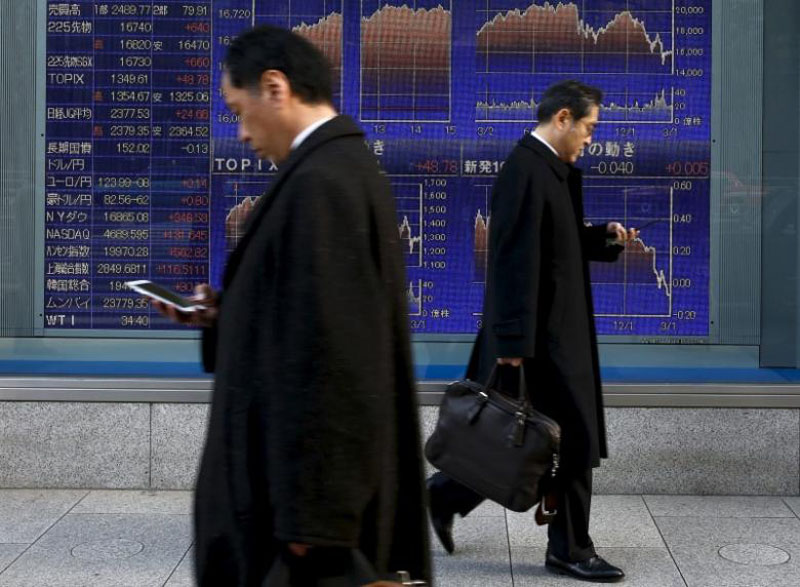 Men walk past an electronic board showing market indices outside a brokerage in Tokyo, Japan, March 2, 2016. Photo: Reuters
TOKYO: Asian shares firmed on Thursday, encouraged by stronger US economic data and a rise in oil prices, while growing prospects of a US rate hike hit gold and the boosted the dollar to one-month highs versus the yen. MSCI's broadest index of Asia-Pacific shares outside Japan .MIAPJ0000PUS rose 0.2 percent while Japan's Nikkei .N225 gained 0.9 percent. On Wednesday, US S&P 500 Index .SPX gained 0.43 percent, led by banks and energy companies. US services sector activity recovered sharply in September from six-year low hit in August, following similarly upbeat news from US factories on Monday. "Both manufacturing and service indexes recovered from big falls in August. While it is not clear what the underlying US economic trend is, given the recovery in Japanese and Chinese surveys the global economic cycle appears to be rebounding for now," said Chotaro Morita, chief bond strategist at SMBC Nikko Securities. Rising optimism on the US economy boosted bets that the US Federal Reserve will raise interest rates in December. The policy-sensitive two-year US note yield hit a four-month high of 0.857 percent US2YT=RR with interest rate futures FFZ6 FFF7 pricing in more than a 60 percent chance the Fed will hike by its December meeting. The 10-year US Treasuries yield US10YT=RR also rose to 1.706 percent, compared to around 1.60 percent at the start of week. The rise in bond yields partly stemmed from speculation the European Central Bank may eventually taper its bond buying after Bloomberg reported on Tuesday the bank would probably wind down the monthly 80-billion euro ($90 billion) scheme. Euro zone bond yields have picked up since then, with Germany's 10-year Bund yield DE10YT=TWEB rising back to near zero percent from 2 1/2-month low of minus 0.16 percent hit last week. The specter of tighter monetary policy in the US and Europe hit precious metals hard. Gold XAU= extended losses after its sharp fall on Tuesday, hitting a 3 1/2-month low of $1,262.2 per ounce. Silver XAG= also fell to $17.565 per ounce, its lowest since late June. In the currency market, the dollar rose to a one-month high of 103.67 yen JPY= and last stood at 103.52 yen. The British pound GBP=D4 recovered slightly after hitting a three-decade low of $1.2686 on Wednesday on worries about Britain's EU exit. It last traded at $1.2747. The euro EUR= was little changed at $1.1209, with pressure from concerns about the health of Deutsche Bank (DBKGn.DE) offset by speculation about the ECB's tapering. Oil prices rose to their highest since June after the fifth unexpected weekly drawdown in US crude inventories added to support on hopes that major producers will agree to cut output next month. The US Energy Information Administration said crude stockpiles fell 3 million barrels last week, well below the build of 2.6 million barrels forecast by analysts in a Reuters poll.
#United States #Asian shares #Asia-Pacific shares
You May Also like: