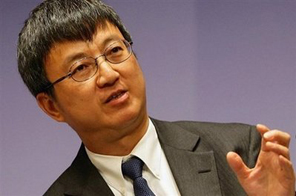 The Bank of China has announced that vice president Zhu Min, pictured, had resigned, amid speculation that he is set to take a senior position at the International Monetary Fund. Source: AFP

BEIJING: The Bank of China announced Tuesday vice president Zhu Min had resigned, amid speculation that he is set to take a senior position at the International Monetary Fund (IMF).

Zhu, 56, was leaving the state-run bank to join another organisation, the Chinese lender said in a statement to the Shanghai stock exchange, without elaborating.

"Bank of China Co received the resignation from vice president Zhu Min on October 16. Mr Zhu resigned from the position of vice president because he will transfer to another post," the statement said.

State media has said Zhu -- who would first take up a position at the central People's Bank of China -- would be the first Chinese national to hold a major post within the Washington-based fund.

A spokesman for the Bank of China declined to comment on Zhu's resignation and no one at the IMF was immediately available to comment.

Dow Jones Newswires, citing an unnamed Communist Party official, reported over the weekend that China's cabinet had approved Zhu's appointment as a central bank vice governor and that it would be announced soon.

The report said the move was aimed at grooming Zhu for the IMF.

Zhu, a veteran in China's banking industry and a former economist with the World Bank, is considered a strong candidate to represent China's interests within the IMF, the 21st Century Business Herald said last week, citing unnamed sources.

It did not say when he could take up the post.

China and other developing countries have pressed the IMF to reform its governance structure to better reflect their growing global economic clout.