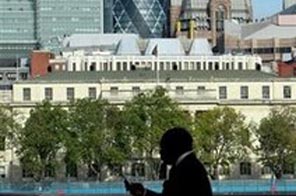 File photo shows a man passing in front of the skyline of the main financial district of London. Source: AFP

LONDON: British Prime Minister Gordon Brown on Tuesday pledged action to crack down on excessive bonuses for bankers as part of international efforts, a key issue at this month's G20 meeting.
But Brown was unenthusiastic about France's proposal for a mandatory cap on bonuses in the wake of the financial crisis, saying it would be difficult to enforce, according to an interview with the Financial Times newspaper.
"I think that is very difficult in an international environment. But there may be ways... that we could do better," Brown said.
French President Nicolas Sarkozy has said he would call for limits on bonuses for bank executives when he takes his campaign for greater regulation to the G20 summit in Pittsburgh on September 24-25.
France and Germany want the European Union to agree on a common position on financial regulation ahead of the G20 summit.
Brown said pay and bonuses should be based on long-term success, not short-term speculative gain, and banks should "claw back" rewards for bankers if their performance suffered in subsequent years.
He also said regulators should be able to impose higher capital requirements on financial institutions, according to the FT.
"I think you?ve got to be absolutely clear that remuneration has got to be based on long-term success, not short-term speculative deals, that there?s got to be a clawback system in remuneration itself so that if things are not working in year two then there is a clawback that is possible as an example."
"And I think we?ve also got to look at whether the capital requirements of individual institutions would have to be increased in situations where the regulator thought that risk was higher," Brown said.
"Now, these are principles that I think we can more or less agree and they came out of (the G20 meet in) London in April.
"But they have not yet been implemented in the running of the institutions and they?ve got to be implemented as quickly as possible."
Brown, praised for his leadership at the G20 in London, stressed international cooperation on such issues was crucial.
Excessive risk-taking, resulting in massive bonuses for bankers, has been blamed for helping spark the global financial crisis that led to multi-billion dollar government bailouts of world banks.
Brown said he hoped leaders in Pittsburgh would agree a "global compact for growth" including coordinated steps to withdraw stimulus packages and government support for banks.
He also wanted to see a deal on "trigger points" where countries would be expected to act to address imbalances such as excessive current account deficits and surpluses.

#Britain's Brown eyes action on bonuses
You May Also like: