Call for revamping the mountaineering sector 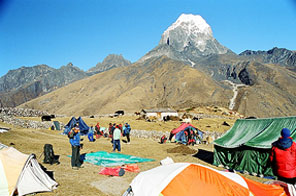 KATHMANDU: Though the government has made an ambitious plan to double the number of visitors by 2011 people related to the mountaineering sector feel
that though the sector is a major tourist attraction all over it
still lacks technical skills and mountaineering charges here are costlier compared to Pakistan and Tibet.
“We have observed some increase in the number of tourists coming here for mountaineering since two years, but this is not any cause for content as the mountaineering charges inTibet are far cheaper and scetor people there have extensive technical skills,” said Trekking Agents’ Association of Nepal (TAAN) president Jyoti Adhikari. The mountaineering charges during the peak seasons are far higher than those in Tibet and Pakistan.
Mountaineering being the backbone of Nepal’s tourism industry, the government made decisions in a bid to make mountaineering royalty fee competitive among neighbouring countries, promote mountains lying in remote and less privileged areas, create environment to transform the seasonal mountaineering business into year-round and materialize the concept of ‘Nepal for all Seasons’.
According to this, there will be a discount of 50 per cent in winter and summer and 75 per cent discount in autumn while keeping intact the royalty fee in spring. There will be 100 per cent discount on royalty fee for mountains located in mid-western and far-western development regions for five years. There is also the Implement Incremental Royalty Break-down System (IRDS), a system under which permit fee increases with the increase in number of climbing members on all mountains instead of lumpsum per expedition having members seven or less than that.
Adhikari said, “Apart from the Dhaulagiri, no tourist arrival has been noted in the western part of Nepal although there the mountaineering charges are free.” Giving promotional rates is not enough, there must be special promotion, he said. “The government must concentrate on rescue packages, special informative programmes and technical assistance which can change the negative perspective,” Adhikari said.
There are a number of problems ranging from the technical aspect to the mountaineering charges. Besides, political instability has left everything in a turmoil. Against this backdrop, the mountaineering sector needs urgent revival with new technology and exclusive mountaineering charges to cope and register growth in tourist arrivals, he added.
According to him, the mountaineering sector contributes two per cent of the total tourist arriving in Nepal — 10,000 per year. “Our peak season is March-May and most of them are high paying and long staying tourists,” he said.
For tourists willing to climb Mount Everest from the normal route, South East Ridge, the mountaineering royalty fee in US dollars per head is 25,000 during spring, 12,500 during autumn and 6250 during winter/summer whereas for a team of seven climbers the cost during spring season is $70,000, in autumn $35,000 while during winter/summer it is $17,500. Per extra climber in an expeditionthe charge is $10,000, $5000, $2,500 for spring, autumn and summer/winter respectively, according TAAN.
For lower heights like 6500m or below 6500m a climber has to pay mountaineering royalty fee of $400 in spring, $200 in autumn and $100 in winter/summer whereas a team of seven climbers has to pay $1000 in spring, $500 in autumn and $250 in winter/summer. Per extra climber charge is $200, $100 and $50 in spring, autumn and winter/summer respectivley, said TAAN.

#Call for revamping the mountaineering sector
You May Also like: