Carrying traditional essence and safety together 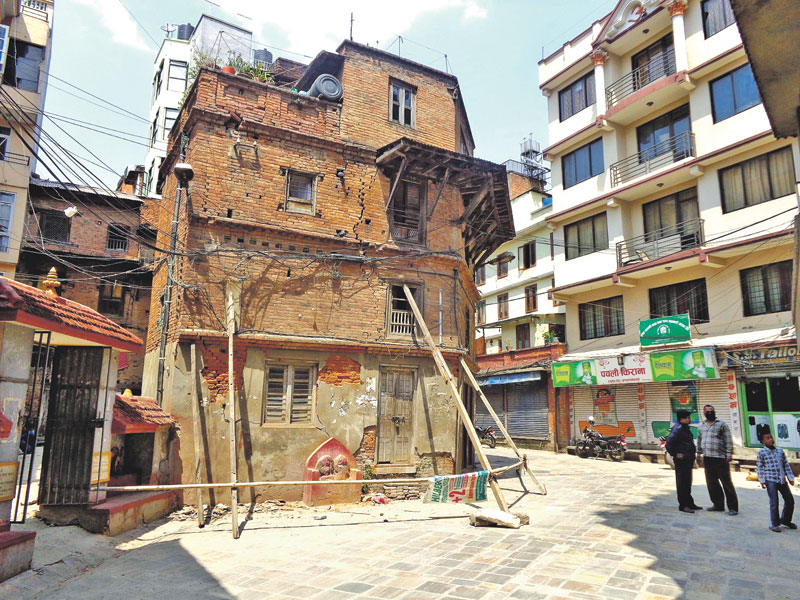 Photo: THT
Kathmandu Many traditional buildings either collapsed or were partially damaged by the deadly earthquake of April 25. After the quake people have developed the feeling that a reinforced concrete building is much durable and quake resistant than traditionally built buildings. However, experts stated that both traditional as well as modern buildings can be durable and earthquake resistant if built adopting seismic resistant technology. Any structure built violating or without taking care of the engineering norms are vulnerable to possible damage by quakes. Professionals stated that even  masonry buildings following norms can last for many decades. However, such structures build by neglecting structural strengthening, addition of stories without considering its capacity to bear load are the main cause for their collapse. There is a clear indication that lack of periodic restoration and maintenance of structures had a major affect on the endurance of structures during earthquake. “People were not aware about periodic structural strengthening and retrofitting of their houses,” said Senior Structural Engineer Rajan Suwal stressing on the need to have a periodic study on the condition of structures and conducting restoration with updated traditional techniques to sustain the buildings. According to him, the government should learn a lesson from the past and should work to strengthen the existing buildings. “One should not feel that traditional buildings are weaker than reinforced buildings as both structures have withstood and collapsed as well during the quake,” Suwal said, adding that it depends on the techniques being used to construct the building.

Photo: THT
He stressed on the need to restore traditional buildings to preserve the essence of the culture. Citing that there could be shortage of required construction materials like timber, traditional styled bricks, mud with workmanship to rebuild massive structures, Suwal said, “The government should give priority to reconstruction and give subsidies if anyone wants to build their residential houses in a traditional way.” Stating that there is a lack of skilled manpower to work with traditional structures, he said, “If the government prioritises work and provides training, the available resources will be enough to work promptly.” “The raw material and quality of products are a challenge to build masonry buildings,” he said, adding that timber being expensive, the government should work to make it accessible. According to him, constructing traditional house becomes 25 per cent more expensive than constructing using reinforced building. Researcher in Structural Earthquake Engineering Dipendra Gautam said that reuse of rubble can contribute to restoration of traditional buildings. “We have found that the majority of masonry buildings failed to tie middle walls and front walls and that resulted in their  fall,” he said, adding, “In this regard, if the binding component is done properly, most traditional buildings can be safe and long-lasting.” Moreover, he said that introducing seismic strengthening technology to abide two walls with steel rebars can increase the durability and sustainability of the building. According to Gautam, the government should conduct special research on typical Nepali styled traditional masonry buildings as the National Building Code lacks specific parameters and design. Pointing out that there lacks timely maintenance and repair works on traditional buildings, he said, “It is very important to elongate the life of these buildings. And the other silly mistake that we all make is haphazardly piling up storeys, which weakens the building.” Citing that the traditional look of heritage sites and the city is important for preservation of the ancient art and architecture, he said, “The government should focus on maintaining traditional buildings and take out the framework to reuse available construction materials and seismic strengthening technology.”
#Nepal earthquake #Architecture #Nepali tradition #Nepali culture
You May Also like: