Cement industry on the path to self-reliance 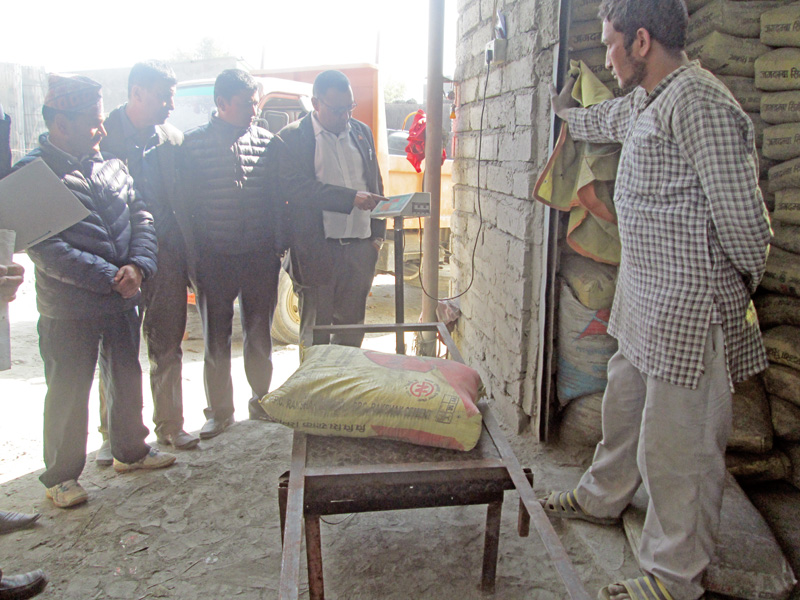 Members of the Kaski District Market Monitoring Committee check weight of a cement sack at a hardware shop during an inspection in Pokhara, on Tuesday, February 7, 2017. Photo: Rishi Ram Baral

Against the backdrop of widening trade deficit of the country, domestic cement industry has been moving towards self-reliance in the recent years.

Due to the increase in domestic production, cement import in the country is in the falling trend of late. Moreover, entrepreneurs involved in the cement production have said that domestic production will completely fulfil country’s demand of cement within less than two years if the government promotes the industry.

Moreover, the data prepared by Trade and Export Promotion Centre (TEPC) of the government shows that cement import has come down by 36 per cent in the first nine months of the ongoing fiscal year compared to the corresponding period of 2015-16.

“Almost 15 per cent of domestic demand of cement today is met by imported cement. Once the government assures easy supply of raw materials for cement industries, cement import will be substituted completely,” said Tara Pokharel, general secretary of Cement Manufacturers Association of Nepal.

Manufacturers said that the annual demand for cement in the domestic market stands at around eight million tones, of which 85 per cent is fulfilled by local production.

According to manufacturers, lack of proper quality categorisation of cement by the government has compelled imports of Indian cement in Nepal.

Majority of big projects in Nepal mention the need for 43-grade and 53-grade cement in its procurement specifications. Since the government has placed all domestic cement under 33-grade, local manufacturers are unable to supply cement to such big projects. Hence, such projects have been using Indian cements.

However, manufacturers have been claiming that the cement produced by local industries meet the quality standards of 43-grade and 53-grade and have long since been demanding that the government revise the grading process.

“If the government started certifying domestic cements with quality grades, it would increase competitiveness of domestic cement against the Indian brands,” said Pokharel.

Manufacturers have also said that Nepal will soon become self-reliant on clinker — one of the major raw materials for cement production. They said that 15 cement industries in the country are manufacturing clinkers themselves and are also supplying to other cement industries.

“As a number of other cement industries are also preparing to produce clinkers on their own, clinker imports will also be substituted by domestic production soon,” said Pokharel. Almost 30 per cent of the domestic demand of clinkers is fulfilled by supplies from India.

There are 53 cement industries operating in the country.

Meanwhile, Bishwo Babu Pudasaini, director general of the Nepal Bureau of Standard and Metrology (NBSM), said that quality certification for domestic cement brands will be started in less than a month. NBSM has already prepared a draft of quality certification for cement and is waiting endorsement from the Nepal Standard Council (NSC), which is headed by the minister for industry.