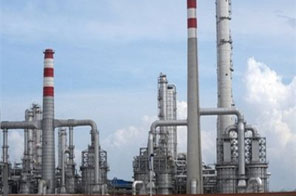 A chemical plant of Chinese energy giant CNOOC and Anglo-Dutch firm Shell petrochemical plant in Daya Bay in southern China. The country has imposed anti-dumping duties of as much as 35 percent on a chemical from the United States, in the latest tit-for-tat trade measure ahead of a visit by US President Barack Obama. Source: AFP

BEIJING: China on Monday imposed anti-dumping duties of as much as 35 percent on a chemical from the United States, in the latest tit-for-tat trade measure ahead of a visit by US President Barack Obama.
The tariffs on adipic acid, which will also be imposed on imports from the European Union and South Korea, will be effective for five years at a rate from five percent to 35.4 percent, the commerce ministry said in a statement.
"Investigation authorities concluded that the products made in countries and regions like the US and EU are being dumped (in China), causing substantial damages to the domestic adipic acid sector," said the statement posted on its website.
Adipic acid is mainly used to make nylon but is also a pharmaceutical ingredient and can be used to produce food flavouring.
Trade tensions between China and the United States have intensified in recent weeks, with both sides taking action against the other's imports.
Obama, who is due in China from November 15-18 for his first visit since taking office, ignited the first major trade spat of his presidency in September after he imposed punitive duties on Chinese-made tyres.
An angry Beijing lodged a complaint at the World Trade Organization and retaliated by launching a probe into possible unfair trade practices involving imports of US car products and chicken meat.
Last month, the United States launched a probe on whether to slap almost 100 percent tariffs on steel pipes imported from China.
In a sign of progress, China pledged at high-level talks with US officials in eastern Hangzhou last week to lift restrictions on US pork imports and Washington said it would ease curbs on Chinese poultry imports.
China also promised to improve copyright protections and ease restrictions on foreign involvement in its rapidly growing wind power sector, but said it was investigating possible dumping by US automakers.

#China imposes duties on imported chemicals
You May Also like: