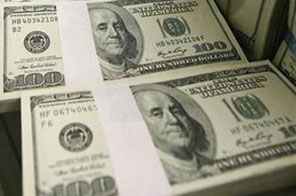 LONDON: The dollar fell against the euro on Monday amid fresh worries about the US financial sector following the bankruptcy of US bank CIT Group over the weekend.
In late morning London deals, the European single currency rose to 1.4772 dollars from 1.4715 dollars late on Friday.
Against the Japanese currency, the dollar gained to 90.22 yen from 90.08 yen late on Friday in New York.
Investors had initially bought the yen during Asian trading hours after CIT Group filed for bankruptcy protection on Sunday, reigniting jitters about the woes of the US financial sector.
The dollar recovered losses however owing to fears it had fallen too rapidly, "but it will likely remain under pressure," said Hideaki Inoue, chief foreign exchange manager at Mitsubishi UFJ Trust and Banking Corp.
Barclays Capital analysts said CIT Group's troubles had triggered fears among currency traders that the lender could suffer a similar fate to Wall Street giant Lehman Brothers, whose collapse last year rocked world markets.
But they said the CIT bankruptcy, while significant, was unlikely to have a lasting impact on the foreign exchange markets.
"Importantly, according to the company, the bankruptcy is designed to allow CIT to continue to provide funding to its small and medium-sized businesses, and also, in our view, to reduce the knock-on effects," they wrote in a note.
Investor risk appetite was also reduced by a sharp drop in stocks on Wall Street on Friday that sent Asian markets lower on Monday.
Markets were also nervous ahead of monetary policy decisions due this week in the United States, the eurozone, Britain and Australia, as well as key US jobs data on Friday.
"I think the market will react sensitively (to developments) this week," Inoue said. "But investors expect no major changes or an exit strategy from the stimulus policy to be announced by the Fed," he said.
The US Federal Reserve (Fed) is widely expected to hold its key lending rate steady with a range of zero to 0.25 percent until early 2010.
Australia's central bank, however, is tipped to announce on Tuesday that it is raising its benchmark interest rate for the second time in less than a month to prevent the domestic economy overheating.
In London on Monday, the euro was changing hands at 1.4772 dollars against 1.4715 dollars late on Friday, at 133.27 yen (132.62), 0.8996 pounds (0.8955) and 1.5093 Swiss francs (1.5106).
The dollar stood at 90.22 yen (90.08) and 1.0217 Swiss francs (1.0260).
The pound was at 1.6418 dollars (1.6440).
On the London Bullion Market, the price of gold rose to 1,054 dollars an ounce from 1,040 dollars an ounce late on Friday.

#Dollar falls as US lender goes bankrupt
You May Also like: