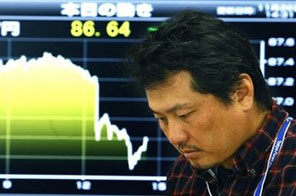 A Tokyo money dealer looks at a memo as the U.S. dollar is traded at 86.64 yen on the Tokyo foreign exchange in Tokyo, Japan, Thursday, Nov. 26, 2009. The dollar has tumbled to 14-year low against the Japanese yen after traders reacted to indications that U.S. interest rates will remain low and that Federal Reserve isn't overly concerned about the dollar's slide. Source: AP Photo/Shizuo Kambayashi

LONDON: World stock markets fell sharply Thursday as investors fretted over the debt problems at Dubai World, a government investment company, and the continued fall in the dollar.
Markets are usually relatively quiet when Wall Street is closed for a holiday, as it is Thursday for Thanksgiving Day — not so today.
In Europe, the FTSE 100 index of leading British shares was down 99.84 points, or 1.9 percent, at 5,264.97, although trading has been halted for over an hour because of technical problems. Germany's DAX fell 115.17 points, or 2 percent, to 5,687.85 while the CAC-40 in France was 84.92 points, or 2.2 percent, lower at 3,724.24.
Earlier in Asia, the Shanghai index tanked 119.19 points, or 3.6 percent, to close at 3,170.98, its biggest one-day fall since August 31, while Hong Kong's Hang Seng shed 1.8 percent to 22,210.41.
Sentiment in stocks has been dented by the news that Dubai World, which is thought to have debts totaling around $60 billion, has asked creditors if it can postpone its forthcoming payments until May. That has stoked fears of a potential default and contagion around the global financial system, particularly in emerging markets.
"Certainly the Dubai debt debacle and the uncertainty that it has created has had a severe knock on effect," said David Buik, markets analyst at BGC Partners.
Investors were also keeping a close eye on developments in the currency markets as the dollar slid to a new 14-year low of 86.27 yen, while the euro pushed up to a fresh 15-month high of $1.5141. By late-morning London time, the dollar had recouped some ground and was trading at 86.75 yen, down 0.7 percent on the day, while the euro was 0.3 percent lower at $1.5094.
The continued appreciation in the value of the yen continues to dent Japanese stocks as investors worry that the rising currency will have a detrimental effect on the country's exports. Japan's Nikkei 225 stock average fell 58.40 points, or 0.6 percent, to 9,383.24.
Kit Juckes, chief economist at ECU Group, said the developments in Dubai and in the currency markets are related as the fall in risk appetite has pushed money into government bonds and into safe haven currencies such as the Swiss franc and the yen.
This, he said, is "testing the tolerance of central banks to see their currencies cause further damage to their economies."
Already there has been unconfirmed talk in the markets that the Swiss National Bank has intervened to buy dollars to prevent the export-sapping appreciation of the Swiss franc.
Meanwhile, Japanese Finance Minister Hirohisa Fujii tried to assure the market he was closely monitoring the situation and would "take appropriate steps if foreign exchange rates move abnormally." But that did little to ease investor worries.
Across all markets, there is a growing awareness that investors may use the upcoming year-end to lock-in whatever profits have been made over the last 12 months.
Gold, one of the biggest high-flyers over the last few months, continued to rise as it garnered renewed support from its safe haven status. It hit a new record high of $1,196.8 an ounce, before falling back modestly. By late-morning London time, gold was down 0.3 percent at $1,183.90 an ounce.
Oil also fell alongside stocks — the two have traded alongside each other for much of this year. Benchmark crude for January delivery was down 84 cents at $77.12 a barrel. On Wednesday, it rose $1.94.
Elsewhere in Asia, markets in Australia, Singapore, Taiwan and Indonesia closed lower.