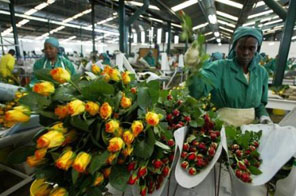 Kenya, the biggest economy of the bloc, Does a huge business exporting flowers Source: AFP

ARUSHA: Leaders of the five-member East African Community gathered at the bloc's headquarters Friday to sign a common market treaty to allow free trade, movement and right of residence in the region.
The presidents of Burundi, Kenya, Rwanda, Tanzania and Uganda will pen the the East Africa Common Market Protocol in the northern Tanzanian town of Arusha at a ceremony coinciding with the 10th anniversary of the EAC's revival.
The protocol is expected to come into force in July 2010 when the member states shall have ratifed it.
"It is anticipated that the ratification process will be smooth since most of the outstanding issues have been ironed out after protracted negotiations by partner states," Kenya's ministry of East African Community said this week.
The bloc's Secretary General Juma Mwapachu told AFP in a recent interview that the leaders had no option but to enter the common market.
"There is no choice. Let us go into the common market and confront the challenges," said Mwapachu, a Tanzanian.
However, efficiency of the common market will be hobbled by poor roads and railway network across the region. The bloc only recently launched projects to link the member states with a railroad, notably landlocked Burundi and Rwanda.
First established in 1967, the EAC collapsed 10 years later due to differences in economic ideologies and political fall-out after the ouster of Uganda's first president Milton Obote.
It was resurrected when leaders of Kenya, Uganda and Tanzania agreed in November 1999 to create a European Union-style common market for their 90 million citizens to strengthen their economic and political clout.
Rwanda and Burundi joined the bloc in 2007, expanding its population to 126 million and a GDP of 60 billion dollars.
In 2005, the grouping established a customs union setting common tarrifs for external goods. It is currently working to form a monetary union by 2012 and ultimately a political federation.