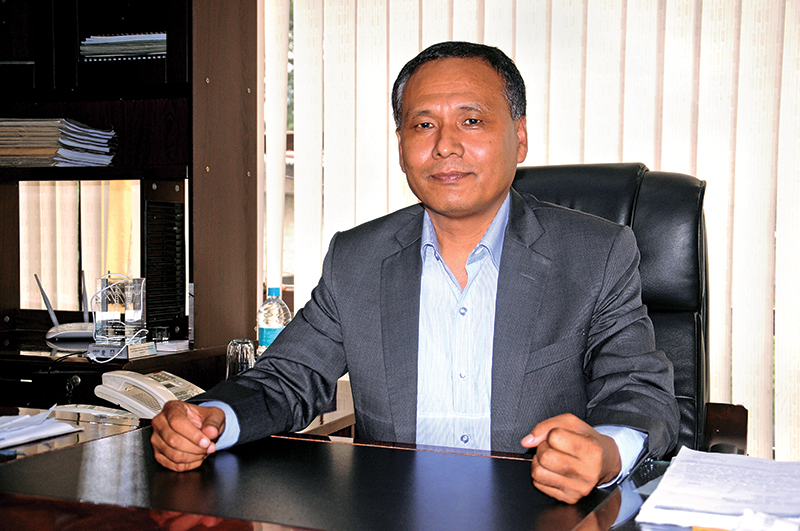 File - Interview with Kul Man Ghising, Managing director of Nepal Electricity Authority at Ratnapark in Kathmandu on Sunday, September 25, 2016. PHOTO: Balkrishna Thapa Chhetri/THT
Kathmandu, February 6 Industrialists have shown strong reservations against the proposal of Nepal Electricity Authority (NEA) to hike tariff for the industrial sector citing it will raise the cost of production of the industries and ultimately hit the industrial production of the country as industries will be forced to pull down their shutters. In an interaction programme titled ‘Electricity for Industrial Growth’ organised by the Federation of Nepalese Chambers of Commerce and Industry (FNCCI) — the largest umbrella body of the private sector — its President Pashupati Murarka said that industrial sector, which is gradually recovering from the devastating earthquake and border blockade — will be further hit due to electricity tariff hike because the industrial products will be less competitive in both domestic and international markets. “Contribution of the manufacturing sector will further decline from around five per cent at present if electricity tariff is hiked,” said Murarka. Contribution of manufacturing sector to the gross domestic product (GDP) has been sliding every year — from 9.03 per cent in fiscal 2000-01 to 5.53 per cent in fiscal 2015-16. FNCCI said that NEA’s strategy to cross-subsidise loss of household sector from industrial sector is not an amicable solution and suggested the power utility to seek loss accrued in providing subsidy to the household sector from the government. Gyanendra Lal Pradhan, the chair of energy committee of FNCCI and member of the Electricity Tariff Fixation Commission (ETFC) — the independent body to fix electricity tariff — assured that the ETFC will not take the proposal of the power utility into consideration. NEA had recently urged the ETFC to hike the tariff for power supplied to industries by 20 per cent to minimise the loss being borne by the power utility due to mismatch of electricity purchase and selling prices. According to NEA, the average rate for users of the industrial sector is Rs 9.66 per unit. However, it costs Rs 12.13 per unit for NEA to supply power to the industries. Due to this, NEA has been facing a loss of Rs 2.47 per unit or 20.36 per cent on the sale of electricity to the industrial sector, which is worsening the financial health of the government entity. ETFC has fixed separate rates for industries for peak hours, normal hours and off-peak hours. NEA was not too concerned about the tariff fixed for the industrial sector till last year because the country’s power generation was sufficient to meet the demand of the industrial sector during the dry season as well. In the programme today, Kulman Ghising, managing director of NEA, sought support from the industrial sector to make rational adjustments in tariff. “As we are supplying electricity regularly to the industrial sector now, the industries should focus on increasing production and taking advantage through economies of scale,” said Ghising, adding “Industrialists need to realise that the industrial production was less cost-effective in the past due to unpredictable power supply and the need to use diesel generators to meet power needs.” As per Prabal Adhikari, spokesperson for NEA, industrial sector is the major consumer of the electricity supplied from the NEA. In terms of number of consumers, NEA has only around 44,000 industrial clients out of the total three million clients, as per Adhikari. “However, the industrial sector consumed 36.3 per cent or 1,359 gigawatt hours of the total electricity supplied in last fiscal.” NEA had supplied a total of 3,744 gigawatt hours of electricity last fiscal and the households consumed the largest chunk — or 1,667 gigawatt hours.
#Nepal Electricity Authority #Federation of Nepalese Chambers of Commerce and Industry #FNCCI #NEA #industrialists #electricity tariff #Electricity for Industrial Growth
You May Also like: