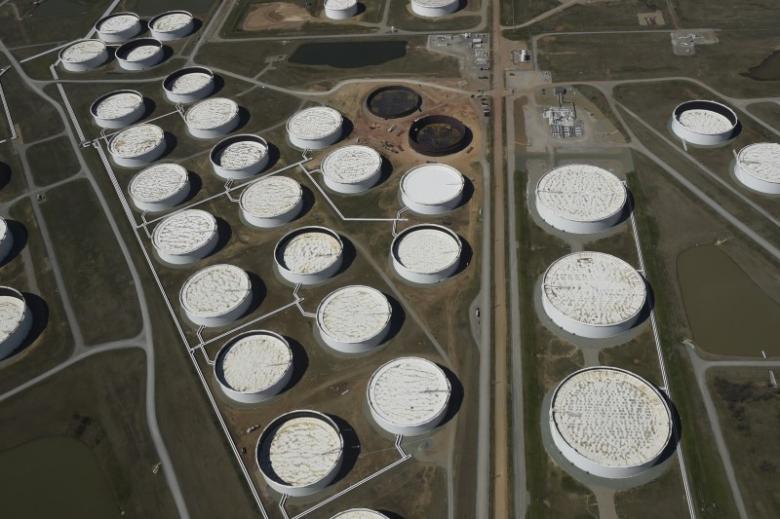 Crude oil storage tanks are seen from above at the Cushing oil hub, in Cushing, Oklahoma, March 24, 2016. REUTERS
US oil futures held above $50 per barrel on Friday as the entire crude forward curve pushed above that level in a sign that financial markets have increasing confidence in the sector. US West Texas Intermediate (WTI) crude futures CLc1 settled at $50.44 per barrel on Thursday - the first settlement above $50 since June 24 - and were trading on Friday up three cents at $50.47 per barrel at 0123 GMT. International Brent crude futures LCOc1 already moved over $50 at the start of this week, and were trading at $52.51 per barrel at 0123 GMT on Friday, flat with their last settlement. With both front-month contracts above $50 per barrel and each forward curve in contango, in which contracts for future delivery are more expensive than those for immediate sale, the entire crude futures complex has moved back over $50 per barrel. (Chart: tmsnrt.rs/2dz0bQH) "There is still no end in sight for the current bullish run. Speculators have been buying every short-term dip, a strategy that has evidently been working very well so far," said Fawad Razaqzada, market analyst at futures brokerage Forex.com. "This trend could well continue for some yet as after all crude oil's fundamental outlook continues to improve: as well as the planned OPEC oil output cut, we have seen surprise inventory destocking in the US for five straight weeks now. Consequently, U.S. oil stocks have now fallen below 500 million barrels for the first time since January," he added. The Organization of the Petroleum Exporting Countries (OPEC) plans to agree on a coordinated production cut when it next meets in late November, in a bid to rein in a global fuel supply overhang that has dogged prices for the last two years. "OPEC kept the heat on oil prices overnight. The Algerian Energy Minister saying that OPEC could cut by more than the 0.5 million barrels per day initial agreement," said Jeffrey Halley of brokerage OANDA in Singapore. "More significantly representatives of both OPEC and Non-OPEC producers will meet for a tete-a-tete on the sidelines of yet another energy conference next week." Despite the increasing confidence by financial oil traders in higher prices, the physical market remains relatively weak. In a sign of ongoing oversupply and price competition between producers, top exporter Saudi Arabia cut its benchmark crude prices to Asia this week, and analysts at JBC Energy warned that there was "a growing disconnect between the physical and the financial (oil) market" which would eventually have to converge.
#United States #oil #West Texas Intermediate #Organization of the Petroleum Exporting Countries
You May Also like: