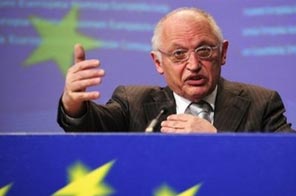 BERLIN: EU Industry Commissioner Guenter Verheugen has criticised informal financial pledges to General Motors by countries vying to save jobs at factories belonging to the automaker's European unit.
"I understand that some countries have already made informal promises. I find that alarming," he told German magazine Spiegel in comments to be published Monday.
According to Spiegel, GM Europe has received offers of 400 million euros (600 million dollars) from Britain and between 300 and 400 million euros from Spain, and Poland has offered tax breaks.
Belgium offered up to 500 million euros for the GM factory in Antwerp to stay open, but this was declined, the magazine reported.
Verheugen said he wanted to "avoid putting jobs up for auction" at GM Europe, called Opel in most countries and Vauxhall in Britain.
The commissioner holds talks Monday in Brussels with European economy ministers and representatives of GM to discuss the future of the US car maker's European business.
The newly named head of GM Europe Nick Reilly is expected to attend the session.
GM stunned the European auto sector earlier this month when it scrapped a decision to sell off its European operation to Canadian auto parts maker Magna International andRussian state bank Sberbank.
The US company decided instead to hold on to its European division and restructure the unit itself.
The automaker is counting on financial support from European governments where factories of its European unit are based for help with the restructuring as part of a 3.3-billion-euro plan.
Berlin had backed the original plans to sell the unit and offered several billion euros in aid to support the transaction.
Germany is home to about 25,000 Opel workers, roughly half of GM Europe's total workforce.

#EU criticises financial pledges to GM Europe
You May Also like: