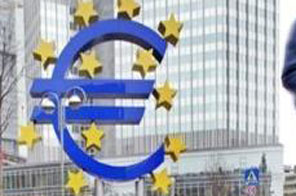 The IMF has forecast the 16-nation eurozone economy will grow by just 0.3% in 2010 Source: AFP

FRANKFURT: Recession is proving hard to shake off for Europe's richest economies, new data showed on Thursday, with low consumer spending, budget deficits and slow exports pointing to tough times ahead.
Add to that a stronger euro that is making eurozone exports more expensive and new data showing the eurozone's balance of payments falling back into negative territory and the picture appears darker still, analysts said.
The balance of payments is a key measure of global economic power and the deficit for August reported by the European Central Bank comes after the data showed a surplus in July for the first time in more than a year.
"We expect the strongest upturn to be in Asia (excluding Japan), with the US outpacing most other industrial countries -- while Japan, the euro area and UK recover most slowly," analysts at banking giant Citigroup said in a note.
The new European data came as China reported that its third-quarter growth accelerated to 8.9 percent -- the fastest pace in a year -- as the economy powered up an expansion built on a flood of stimulus cash and bank lending.
The International Monetary Fund earlier this month forecast that next year China's economy will grow by 9.0 percent, the US economy by 1.5 percent and the 16-nation eurozone economy by just 0.3 percent.
Economic data from individual European countries made for downbeat reading on Thursday, with British retail sales posting zero growth, Italian and Spanish exports sharply down and French business confidence only edging up.
"Consumers are holding back on any spending splurges as retail sales came in weaker than expected," said Manoj Ladwa, a trader at London-based financial spread betting company ETX Capital, referring to the retail data.
Retail sales were disappointing in Italy too, where they fell 0.1 percent in August from July due to a fall in food purchases. Clothes, furniture and electronics sales were also sharply down compared to August 2008.
Meanwhile Italy's trade deficit with countries outside the European Union fell sharply in September to 513 million euros (768 million dollars) from 3.275 billion euros thanks mainly to a steeper fall in imports than in exports.
Italy's imports from non-EU countries were down 29.4 percent in September compared to the same month last year, while exports were 14.8 percent lower.
Spain showed a similar picture, with total imports falling 26 percent in August from August last year, while exports slowed by 16.9 percent.
The outlook was brighter in France, where a business confidence index that reached its lowest point in March edged up three points to 89 points for October -- still well below its long-term average of 100 points.
"This shows the French economy and industry have not just come out of recession but are headed to cruising speed, which is still sluggish growth," said Marc Touati from financial services company Global Equities in Paris.
Amid a sluggish recovery, European firms reported more job cuts.
British pharma company GlaxoSmithKline said it would cut 434 more jobs in France on top of the 750 lay-offs already announced and German chemicals giant BASF announced the closure of a plant in Belgium with the loss of 133 jobs.

#Europe stumbles as Chinese economy surges
You May Also like: