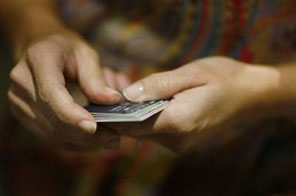 A US woman prepares to cut up her credit cards in a bid to dig herself out of credit card debt during a religious sermon in Kendall, Florida. The US Federal Reserve has held rock-bottom interest rates for "an extended period" and kept trillion-dollar stimulus measures in place to support a fragile recovery from recession. Source: AFP

WASHINGTON: The US Federal Reserve has held rock-bottom interest rates for "an extended period" and kept trillion-dollar stimulus measures in place to support a fragile recovery from recession.
The policy-setting Federal Open Market Committee, headed by Fed chairman Ben Bernanke, said that "although economic activity is likely to remain weak for a time," its policy actions would support the recovery.
As widely expected, the FOMC held its key federal funds rate at a historic low of zero to 0.25 percent, where it has been since last December to help pull the economy out of the worst downturn since the Great Depression.
After a two-day policy meeting, the central bank said it expects that "economic conditions, including low rates of resource utilization, subdued inflation trends, and stable inflation expectations, are likely to warrant exceptionally low levels of the federal funds rate for an extended period."
"The Fed is always obsessed with these three variables but spelling them out now puts down markers for what has to change before rates move," said Ian Shepherdson at High Frequency Economics.
"The first hike is still more than a year away," he added.
The FOMC approved the monetary policy in a 10-0 vote.
The central bank said that "economic activity has continued to pick up" since a September 22-23 policy-setting meeting, suggesting that the world's largest economy was building momentum from the third quarter.
Last week the government said gross domestic product -- a broad measure of the nation's goods and services output -- rose at a 3.5 percent annual rate in the July-September period.
The first quarterly growth in a year, though, was mainly the result of massive government stimulus efforts. Text of the Federal Reserve statement
Analysts said there was little new in the FOMC statement, which is closely scrutinized by economists and traders for clues about the direction of monetary policy.
"The Fed isn't into creating shock waves and since there were no indications that a change in policy was on the way, no change occurred," said Joel Naroff of Naroff Economic Advisors.
"What everyone was looking for was some indication that the committee was considering raising rates in the near future. That, too, was missing from the statement."
The central bank said it expects inflation to remain subdued "for some time" as "substantial resource slack" likely will continue to dampen cost pressures "and with longer-term inflation expectations stable."
"In these circumstances, the Federal Reserve will continue to employ a wide range of tools to promote economic recovery and to preserve price stability," the committee said.
Brian Bethune, chief US financial economist at IHS Global Insight, said that despite the FOMC's aggressive stance on monetary policy, "overall the credit markets are not functioning."
"The Fed's only option is to set benchmark rates exceptionally low so that the cost of credit is reduced across the spectrum of interest rates. This will reduce the cost of capital and increase affordability, with the hope that at some point in the future these factors will dominate risk aversion and lead to a sustained recovery of business and household spending," he said.
The FOMC said although the economy was improving, with the depressed housing market stabilizing and businesses adjusting inventory, the financial markets were "roughly unchanged."
Consumer spending, which traditionally drives two-thirds of US economic activity, appeared to be expanding "but remains constrained by ongoing job losses, sluggish income growth, lower housing wealth, and tight credit."
The Fed unveiled a minor scaleback of its trillion-dollar support of the economy and the financial sector, saying it would purchase about 175 billion dollars of government debt, down from a previously announced 200 billion dollars.
It also said it would buy 1.25 trillion dollars of government agency mortgage-backed securities as previously announced.

#Fed holds low rates to support fragile recovery
You May Also like: