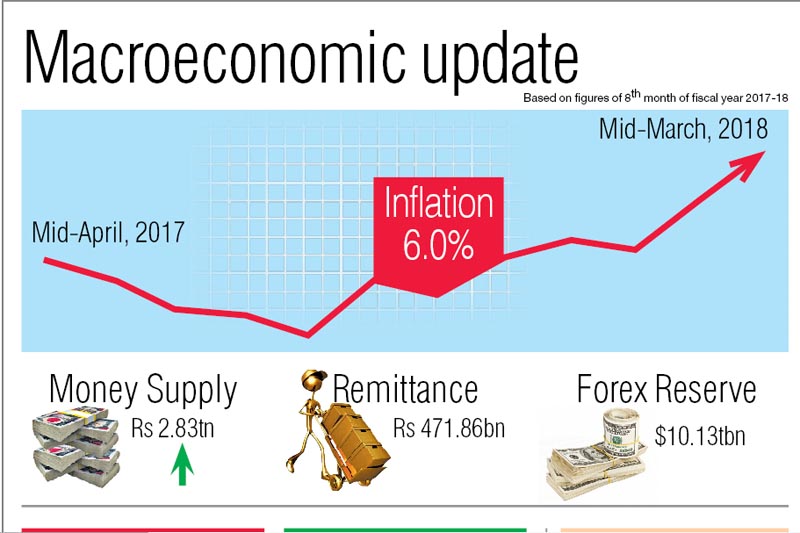 Kathmandu, April 12 Foreign exchange reserves of the country have continuously depleted over the months of this fiscal along with skyrocketing imports against stagnation in remittance inflow, low export growth and less capital transfers into the country. The macroeconomic situation of eight months (mid-July, 2017 to mid-March, 2018) unveiled by Nepal Rastra Bank (NRB) today stated that the country’s gross foreign exchange reserve stood at $10.134 billion compared to $10.49 billion in the beginning of this fiscal. The current reserve position is sufficient to cover the prospective merchandise imports of 11.1 months, and merchandise and services imports of 9.7 months. The situation is considered as alarming when the country’s foreign exchange reserves position is insufficient to cover the merchandise and services imports of eight months. As per the macroeconomic situation, the country exported goods worth Rs 53.42 billion against imports worth Rs 767.36 billion in the review period. Import growth was recorded at a staggering 22.1 per cent, which was more than double the rise in export, which stood at 10.8 per cent. One silver lining in the otherwise mostly dismal scenario was remittance growth, which rebounded with 4.9 per cent growth in the eighth month with total remittance inflow of Rs 471.86 billion in the review period. Remittance growth stood at 5.3 per cent in corresponding period of the previous fiscal. The current account deficit widened further to Rs 153.96 billion in the review period from a deficit of Rs 6.31 billion in the same period of the previous year, as per the macroeconomic situation report. “The significant increase in imports and dividends payment for foreign investment widened the current account deficit.” Similarly, the overall balance of payments remained at a deficit of Rs 24.73 billion in contrast to a surplus of Rs 50.02 billion in the same period of the previous year. In the review period, the flow of foreign direct investment (FDI) amounted to Rs 14.24 billion compared to Rs 8.35 billion in the corresponding period of the previous year. The consumer price inflation rose by a percentage point to six per cent in mid-March compared to five per cent of the previous month (mid-February). The spike in prices of vegetables mainly contributed to the rise in inflation in the review period. However, the average consumer price inflation in the eight months of fiscal 2017-18 remained relatively low at four per cent, as per the macroeconomic situation report of the central bank.