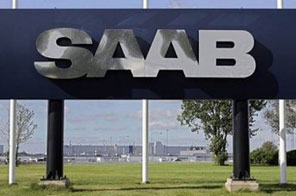 The entrance to the Saab plant in Trollhaettan, Sweden. Formula One boss Bernie Ecclestone has teamed up with a Luxembourg investment firm to launch a last-minute rescue bid for the Swedish carmaker, British media reports have said. Source: AFP

Luxembourg-based Genii Capital announced it was interested in making an offer with Ecclestone, just as the deadline for final bids for Saab expired at 2200 GMT Thursday, the BBC reported.

The privately-held firm said it would "aggressively work towards a successful closing of the transaction with all the relevant stakeholders of the company," according to the BBC.

It said it believes Saab has "tremendous brand value in a number of key automotive markets, as well as an innovative image," the reports said.

Genii already has links with Ecclestone after it last month bought a stake in the Renault Formula One team, allowing the team to remain in the sport.

US carmaker General Motors announced in December it would wind up Saab, which employs 3,400 people in Sweden.

However GM extended a deadline to consider offers for Saab after Dutch sports car maker Spyker approached the US automaker with a last-ditch proposal.

Saab is one of four storied brands that GM is shedding as part of a massive restructuring effort that began in 2005 and accelerated last year when the largest US automaker went bankrupt.

Analysts have warned that some 8,000 jobs could be lost with Saab's closure.

#Formula One boss launches Saab rescue bid
You May Also like: