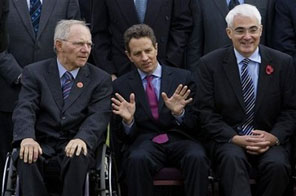 ST. ANDREWS: Finance officials from rich and developing countries have pledged to maintain emergency support for their economies until recovery is assured, but failed to reach a clear agreement to bear the cost of fighting climate change.
There was also a mixed reaction among the Group of 20 leading rich and emerging nations Saturday to a British-led push to consider a fund for bank bailouts, possibly financed by a tax on financial transactions, to ensure that taxpayers don't bear the brunt of any future rescues.
The grouping representing around 90 percent of the world's wealth, 80 percent of world trade and two-thirds of the world's population said in a statement after talks in St. Andrews, Scotland, that economic recovery is "uneven and remains dependent on policy support."
U.S. Treasury Secretary Timothy Geithner said U.S. jobs figures out Friday showing unemployment at a 26-year high of 10.2 percent "reinforced that this is still a very tough economic environment."
While the "process of growth is now beginning," that fledging growth still needs to be reinforced to create jobs and get businesses investing to underpin the recovery in the housing market and elsewhere, Geithner said.
"If we put the brakes on too quickly, we will weaken the economy and the financial system, unemployment will rise, more businesses will fail, budget deficits will rise, and the ultimate cost of the crisis will be greater," he told reporters in Scotland. "It is too early to start to lean against recovery."
The statement smoothed over divisions among G-20 nations about whether it was time to start talking about exit strategies to unwind recent massive stimulus measures. Germany, France and Russia have called for a joint plan on when countries should start repaying debt, and the European Central Bank has indicated it will soon start withdrawing some of its emergency lending to banks.
On climate change, the G-20 officials also said they wanted "an ambitious outcome" at a major UN conference in Copenhagen next month but did not commit to a funding package to help poorer nations adapt to a warming climate.
European nations have promoted a global climate fund of some euro100 billion a year ($148 billion at the current exchange rate) by 2020 combining government and private finance as an incentive for poor developing nations to agree to tight curbs on greenhouse gas emissions.
Swedish Finance Minister Anders Borg, whose country holds the rotating European Union presidency, said no deal on financing would mean that "we will end up with a very difficult situation in Copenhagen."
German Finance Minister Wolfgang Schaeuble said an agreement was scrapped because of emerging nations' unwillingness to contribute.
"Basically a group of emerging nations made it clear that they were unwilling to invest their own funds in the fight against climate change," he told reporters. "We were prepared for that and it was obvious that the industrialized countries would of course bear most of the burden."
Schaeuble indirectly blamed those countries' opposition on the failure of other rich nations — such as the U.S. to pay up.
Geithner made no promises on climate change on Saturday, saying only that progress was being made and that discussions in Scotland showed "there is now an understanding of its place in business and economic impetus for us all."
There was also little traction for British Prime Minister Gordon Brown's call for urgent consideration of a global fund to rescue troubled banks, possibly financed by a tax on financial transactions.
Brown said such a measure was necessary because "it cannot be acceptable that the benefits of success in this sector are reaped by the few but the costs of its failure are borne by all of us."
Supporters of measures such as a so-called Tobin tax a flat tax on currency transactions named after the Nobel Prize laureate James Tobin say the money would protect countries from spillovers of financial crises. Critics argue the tax would simply dry up world financial flows.
Geithner said that the U.S. wanted to focus "on building a system where taxpayers are not exposed to losses if the government has to step out in the future to put out the financial fires," but ducked any clearer comment on Brown's proposals.
Russian Finance Minister Alexei Kudrin said he was "skeptical about such tactics."
"Gordon Brown is well known as the person who raises taxes all the time," he added.
But Sweden's Borg said there was a "strong argument for a stability fee or stability tax on bank assets."
Brown said the International Monetary Fund would report back to the G-20 in April on how global levies on speculation might work.
The climate issue has been the focus of small-scale protests around St. Andrews. Around 200 demonstrators gathered at West Sands beach on Saturday with a group dressed as bankers sticking their heads in the sand.
The officials also emphasized the need for quick implementation of banking industry reform, saying that stronger standards should be developed by the end of 2010 that could be put into force by the end of 2012 as financial conditions improve.
The G-20 is comprised of Argentina, Australia, Brazil, Britain, Canada, China, France, Germany, India, Indonesia, Italy, Japan, Mexico, Russia, Saudi Arabia, South Africa, South Korea, Turkey, the United States and the rotating EU presidency.
AP reporters Aoife White and Ben McConville contributed to this report.

#G-20 finance officials: Too early to end stimulus
You May Also like: