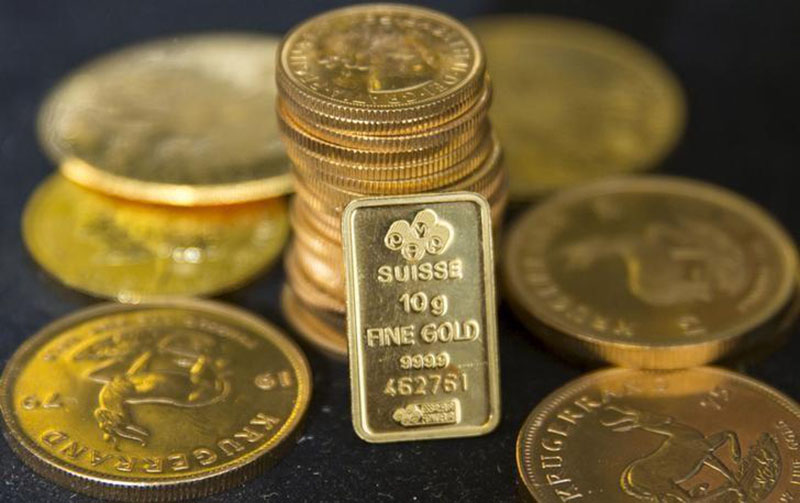 Gold bullion is displayed at Hatton Garden Metals precious metal dealers in London, Britain, on July 21, 2015. Photo: Reuters
Gold prices edged up slightly on Monday as the US dollar gave up some gains and bargain hunters used dips to accumulate the precious metal. Spot gold rose 0.3 percent to $1,253.40 an ounce by 0411 GMT. The yellow metal fell nearly 0.6 percent on Friday to a low of $1,247.01, its lowest since Oct. 7. US gold futures were down 0.1 percent at $1,254.20 an ounce. "Because the possibility of a December rate hike is increasing, generally, the trend of gold price is downwards but in the short term we think that there could be relatively a mild technical correction," said Jiang Shu, chief analyst at Shandong Gold Group. Shu expects prices to touch $1,270 in the short term before a sharp selloff on expectations of a rate hike. "There's still a period of time before the rate hike." US producer prices rose in September to post their biggest year-on-year rise since December 2014, while retail sales gained 0.6 percent after a 0.2-percent decline in August. Positive economic data from the US usually puts pressure on gold prices as investors raise bets on an interest rate hike that would increase the opportunity cost of holding non-yielding bullion. Fed Chair Janet Yellen gave a broad review of where the US economic recovery may still fall short. Though not addressing interest rates or immediate policy concerns directly, Yellen laid out the deepening concern at the Fed that US economic potential is slipping and aggressive steps may be needed to rebuild it. "Though there is not much activity, the metal (gold) is finding good interest in small amounts in China at this price," a trader with a China-based bank said. The dollar index, which measures the greenback against a basket of currencies, was firm at 98.092 after touching a high of 98.169. Hedge funds and money managers again reduced their net long positions in COMEX gold and silver contracts in the week to Oct. 11, US Commodity Futures Trading Commission data showed on Friday. Holdings of SPDR Gold Trust, the world's largest gold-backed exchange-traded fund, rose 0.40 percent to 965.43 tonnes on Friday. Silver was up 0.2 percent at $17.41 a ounce. Platinum rose 0.8 percent to $939.30. It touched an over 7-month low of $923.50 on Friday. Palladium was up over 1 percent at $651, after hitting nearly a three-month low of $629.22 in the previous session.
#US dollar #gold prices #precious metal
You May Also like: