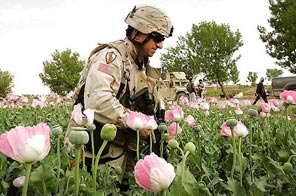 TRIESTE: The U.S. announced a new drug policy Saturday for opium-rich Afghanistan, saying it was phasing out funding for eradication efforts and using the money for drug interdiction and alternate crop programs instead.

The U.S. envoy for Afghanistan, Richard Holbrooke, told The Associated Press that eradication programs weren't working and were only driving farmers into the hands of the Taliban.

"Eradication is a waste of money," Holbrooke said on the sidelines of a Group of Eight foreign ministers' meeting on Afghanistan, where he said it had been warmly received, particularly by the United Nations.

Afghanistan is the world's leading source of opium, cultivating 93 percent of the world's heroin-producing crop. The United Nations has estimated the Taliban and other Afghan militants made an estimated $50 million to $70 million off the opium and heroin trade last year.

In a report released earlier this week, the U.N. drug office said opium cultivation had dropped by 19 percent last year, but was still concentrated in three southern provinces where the Taliban insurgency is strongest.

Holbrooke said the previous U.S. policy, which focused on eradication programs, hadn't reduced "by one dollar" the amount of money the Taliban earned off opium cultivation and production.

"It might destroy some acreage," Holbrooke said. "But it just helped the Taliban."

"We're essentially phasing out our support for crop eradication and using the money to work on interdiction, rule of law, alternate crops," he told the AP. At the same time, Washington is upgrading its support of agriculture programs.

"That's the big change in our policies," he said. "This was widely accepted as the right thing to do."

Agriculture was among the issues taken up by the delegates at the G-8 meeting in their Saturday session on Afghanistan, with participants saying in a draft version of the final statement that agricultural development was seen as "key to the future of Afghanistan and Pakistan as well as other countries in the region."

"The farmers are not our enemy, they're just growing a crop to make a living," he said. "It's the drug system. So the U.S. policy was driving people into the hands of the Taliban."