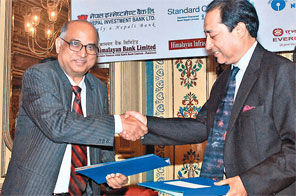 Top officials of both sides after the CRA agreement at Yak & Yati Hotel in Kathmandu on Monday Source: THT

KATHMANDU: ICRA Ltd, India's leading credit rating agency, and Himalayan Infrastructure Fund Ltd (HIFL) today signed a joint-venture (JV) agreement to establish a credit rating agency in Nepal. ICRA also appointed Deepak Kafle as Resident Director of its Nepal office. The Nepali financial market does not have credit rating services.
ICRA's vice-Chairman and group CEO PK Chaudhary and HIFL chairman of HIFL Prithvi Pandey signed the memorandum of understanding (MoU) amid a function here. ICRA has extensive experience in credit rating of the Indian corporate world since 1991, when India was in financial reform and early stages of globalization.
The MoU has been signed on the same conditions for Nepal which India had experienced two decades ago. "The view that a credit rating agency must be integral to the reforms process has gained a foothold in Nepal. We see our JV as both promoting the idea and benefiting from it," Choudhury said. The Nepali corporate world is rapidly changing toward modernization and globalization.
"The entry in Nepal once again highlights ICRA's ability to think beyond borders. The MoU with HIFL is important not only because it gives us a direct offshore presence, but also the increasing acceptance of such expertise built up in India in the area of credit rating within a relatively short period of time. It also reaffirms our confidence in the future growth of the economy of Nepal," Choudhury added.
Echoing Choudhury's sentiments, HIFL chairman Pande said, "The proposed JV is an important initiative for growth and professionalizing of the financial system in Nepal." he said he was confident that the credit rating agency would benefit the country.
ICRA's venturing into Nepal and its increasing footprints beyond the Indian borders underscores the growing international acceptance of an agency that is already a leading provider of credit rating and investment information services in India. The Indian company has also helped in establishing rating agencies like CRAB in Bangladesh, CRC in Kuwait and BCRA in Bulgaria.

#ICRA #HIFL ink CRA agreement
You May Also like: