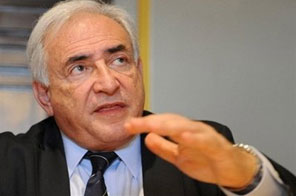 In a speech to a finance forum focused on rebalancing the world economy, Strauss-Kahn highlighted China's efforts to boost private consumption, and said a stronger currency was "part of the package of necessary reforms".

"Allowing the renminbi and other Asian currencies to rise would help increase the purchasing power of households, raise the labor share of income, and provide the right incentives to reorient investment," he said.

"Higher Chinese domestic demand, along with higher US saving, will help rebalance world demand and assure a healthier global economy for us all," he said, according to a copy of his speech received by AFP.

Strauss-Kahn -- whose two-day visit to China coincides with that of US President Barack Obama -- delivered a similar message Friday in Singapore ahead of a weekend summit of Asia-Pacific leaders.

Last week, finance ministers from the Asia-Pacific Economic Cooperation (APEC) forum called for greater exchange rate flexibility, in what is widely seen as code for China to allow the yuan to strengthen against the dollar.

In a joint statement, they said APEC members should follow "monetary policies consistent with price stability in the context of market-oriented exchange rates that reflect underlying economic fundamentals".

#IMF chief again says Chinese yuan should rise
You May Also like: