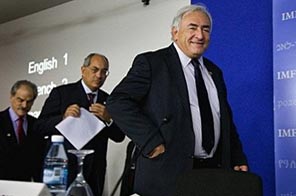 ISTANBUL: The International Monetary Fund has taken on an enhanced global role to promote lasting economic recovery in the world, with its 186 member nations pledging to keep stimulus support of growth in place.
The IMF's steering committee meeting in Turkey's commercial capital, Istanbul, on Sunday endorsed a recovery plan agreed at the Group of 20 (G20) summit last month amid the worst global economic crisis since World War II.
"We are off to the right start," IMF chief Dominique Strauss-Kahn said on Sunday, adding that this was "a unique opportunity to reshape the post-crisis world, to usher in a new era of collaborative global governance."
Japanese Finance Minister Hirohisa Fujii said: "After going through the financial storm, I expect that the IMF will play increasingly important roles to effectively develop a more solid and stable global financial system."
The meeting in Istanbul took place after the IMF said that growth had returned to the global economy but that the crisis was not yet over because of rising unemployment in many countries and a very weak banking sector.
The International Monetary and Financial Committee (IMFC) vowed to maintain stimulus spending "until a durable recovery is secured" and act "to revive credit, recover lost jobs, and reverse setbacks in poverty reduction."
Mario Draghi, governor of the Bank of Italy and chairman of the Financial Stability Board, a new watchdog for the global financial system, warned IMFC members that the financial system remains "fragile".
The IMFC also approved a G20 plan to increase voting rights by at least five percent for under-represented countries in the IMF, a measure seen as helping the group's legitimacy as emerging markets take the lead in recovery.
The IMF last week forecast emerging and developing economies would grow 5.1 percent in 2010 -- in contrast with just 1.3 percent in advanced economies.
China's economy was projected to grow by 9.0 percent next year and India's by 6.4 percent -- far ahead of 1.5 percent expansion in the US economy.