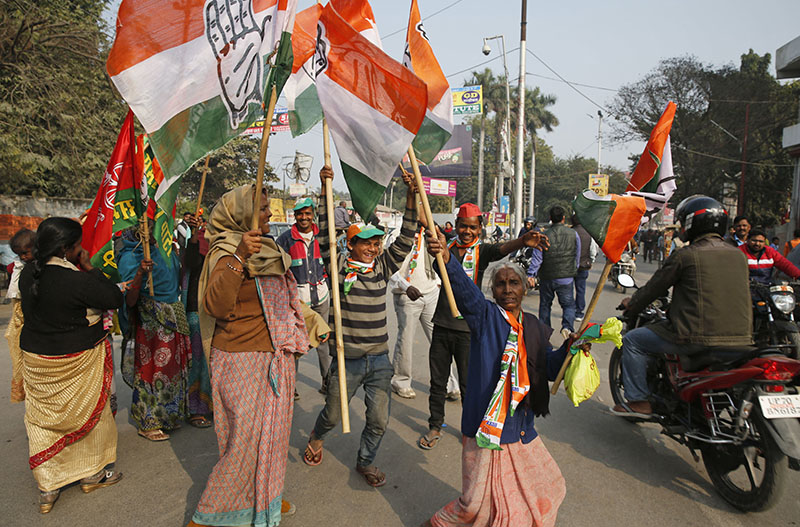 The Congress party and their ally Samajwadi Party supporters dance with party flags as their candidate files nomination papers in Allahabad, in the northern Indian state of Utter Pradesh, on February 2, 2017. Photo: AP
NEW DELHI: Nearly three years ago, Indian Prime Minister Narendra Modi won a sweeping national election victory with promises to develop the economy and root out corruption. But with a series of key state elections beginning Saturday, Modi's popularity — and his surprise currency decree that sparked months of financial uproar — is about to be tested. India is just emerging from the fallout of a November decision that withdrew India's two largest currency notes from circulation and caused weeks of chaos as people waited to get their money back in new bills. Modi and his Bharatiya Janata Party hailed the move as a way to curb tax fraud and corruption and push India toward more digital spending. Opponents say it was a self-inflicted blow on the world's fastest-growing economy, causing enormous hardship for the vast majority of Indians, who rely often completely on cash. While the five state elections will not decide whether Modi remains in office, a loss would be seen as a serious blow to his political image. Most important is the northern state of Uttar Pradesh, whose immense population of 204 million means state elections often help shape the national political agenda. "In these elections, Uttar Pradesh is the real biggie," said Ajoy Bose, a political analyst in New Delhi. "If the BJP were to lose in Uttar Pradesh, it would be a huge setback, both for the party and for Modi. It would destroy the myth of Modi, who has been projected as this political juggernaut of invincible proportions," Bose said. The elections began Saturday in the northern state of Punjab and the beach resort state of Goa. Hundreds of paramilitary troops and police were posted near voting stations across Punjab to ensure security as voters stood in long lines to cast their vote. In the next phase of the election, the Himalayan state of Uttarakhand votes on Feb. 15, and remote northeastern Manipur votes on March 4 and 8. Elections in northern Uttar Pradesh begin on Feb. 11, but because of the state's sise, voting is divided into seven phases. Results from all the elections will be declared on March 11. In 2014, the BJP had won an overwhelming 71 out of 80 parliamentary seats in Uttar Pradesh, or 15 percent of all national legislators in the powerful lower house, ensuring that it emerged as the single largest party in Parliament. But Modi now faces a tough fight in Uttar Pradesh, with the state's current top official, Akhilesh Yadav, in a political alliance with the Congress Party, led by Rahul Gandhi, scion of the Nehru-Gandhi family that ruled India for decades. While the Congress Party is a shadow of its former self, it remains the country's second most popular. The alliance is seen as a way to boost the chances of Yadav's Samajwadi Party while the Congress Party tries to remain relevant in a politically key state. All those candidates must also face Mayawati, a former chief minister of the state and a master of caste-based politics. Mayawati, who uses only one name, is a Dalit, the name given to the lowest rung of India's caste hierarchy. She commands strong support among the state's Dalits, who form more than one-fifth of the population. Uttar Pradesh voters are divided over the recent currency decree, analysts say. "People in rural areas of the state saw the currency withdrawal as an equaliser, where the rich and the poor were hit by the same shortage of currency notes," said Nomita P. Kumar, an economist at the Giri Institute of Development Studies, a think tank in Lucknow, Uttar Pradesh's capital. "Poor people were happy that, for once, the rich were in the same boat as themselves. They think it was a smart move by Modi to curb corruption." Not so in Punjab, where the ruling coalition of the BJP and the regional Shiromani Akali Dal party faces the twin challenges of strong anti-incumbency sentiment and palpable anger against the chaos unleashed by the currency withdrawal. Voters appeared to hold Modi responsible for the economic disruption that followed the abrupt removal of currency. "The people's anger is directed against Modi and this will be reflected in the way they vote," said Bose, who returned Tuesday from a trip through that state. The BJP-led coalition also faces a strong challenge from the upstart Aam Aadmi Party, or Common Man Party, which has tapped into the voters' disappointment with the state government. In Goa, the ruling BJP was beset with divisions among its political allies, while the Aam Aadmi Party and the Congress were also putting up a strong fight. Modi's performance in the current state-level elections is also likely to determine his political strategy in the run-up to the next national elections due in 2019, when he is hoping to wrest a second term in office, analysts said. "This makes the outcome so important. It could be a make-or-break election for Modi," said Bose. The state elections are also significant for their power to help elect a new president. While the Indian presidency is largely ceremonial, it is a high-profile position, and the president can wield significant power in times of political crisis. The current president is Pranab Mukherjee, a Congress Party stalwart whose term ends in July. Presidents are elected by a combination of national and state lawmakers. For Modi to bring in his own president, he needs to win Uttar Pradesh and at least one other state.
#India #Narendra Modi #elections #India state polls #Indian currency chaos #India elections
You May Also like: