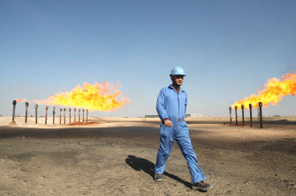 A picture taken on February 3, 2009 shows an engineer walking past the chimneys at the Barjisiya oil field in Zubair One, southwest of the southern Iraqi city of Basra, 550 kms from Baghdad. Iraq will unveil which foreign firms have won contracts to develop its oil and gas fields, nearly four decades after Saddam Hussein nationalised the country's energy infrastructure. The deals, likely to be on June 29 and 30, will provide the government with much-needed revenue as it struggles to rebuild the country after three wars and 20 years of debilitating economic sanctions. Source: AFP

BAGHDAD: Iraq is this week due to unveil which foreign firms have won contracts to develop its oil and gas fields, nearly four decades after Saddam Hussein's party nationalised the country's energy infrastructure.

The deals, likely to be announced live on television, will provide the government with much-needed revenue as it struggles to rebuild the country after three wars and 20 years of debilitating economic sanctions.

The event, originally billed to last for two days starting Monday, was unexpectedly delayed by one day due to sandstorms that prevented oil company representatives and international media from landing in Baghdad on Sunday.

"The meeting will now start on Tuesday and if necessary continue into the following day," oil ministry spokesman Assem Jihad told AFP.

Thirty-one companies have submitted bids to develop six giant oil fields and two gas fields. The oil deposits, holding known reserves of 43 billion barrels of crude, are in southern and northern Iraq while the gas concessions are west and northeast of Baghdad.

"Our principal objective is to increase our oil production from 2.4 million barrels per day to more than four million in the next five years," Oil Minister Hussein al-Shahristani said in an interview with Iraqi public television.

Increasing production to that level will, according to him, pump an extra 1.7 trillion dollars into government coffers over the next 20 years.

Shahristani has said that only 30 billion dollars of that sum will go to the companies that have extracted the oil.

"This is a huge amount that would finance infrastructure projects across Iraq -- schools, roads, airports, housing, hospitals," he said, insisting that the country would retain control over its oil reserves.

For energy firms, meanwhile, the appeal of the Iraqi contracts is the chance to plant a foot firmly in the country, the first time such an opportunity has been offered since the Iraq Petroleum Company was nationalised by the Baath party in 1972, seven years before Saddam took power.

"Thanks to sanctions and war, no company has wanted or been able to invest," Ruba Husari, an energy expert and the founder of the website iraqoilforum.com, explained.

"Today, the country is stable, in both its security and its institutions."

A source involved in the bidding, who spoke on condition of anonymity, described Iraq as "one of the rare countries in the world where the coming decades will bring real growth in production."

"It's a rare opportunity," the source said.

Not all energy companies are happy, though, with the terms of the contracts being offered by Baghdad.

The foreign firms awarded deals to work here will have to partner with Iraqi government-owned firms, principally the South Oil Company (SOC), and share management of the fields despite fully financing their development.

They will be paid a fixed fee per barrel, not a share of the profits, and the fee will only be paid once a production threshold set by the government is reached.

"This raises the question of the profitability of the contract," the source said. "The companies are the ones investing, but have a big problem with the fact that management will be shared."

But international energy giants cannot afford to ignore the contracts on offer.

"For foreign companies, this is like a first step," the source said. "They are saying, 'Let's accept these terms, even though they're not our preferred model, just to stay in the game, and hope conditions improve'."

In effect, foreign energy executives may well be targeting the next round of contracts to be offered next year, when Iraq will grant licences for exploitation of 16 other undeveloped fields.

Domestic firms, including SOC, are furious, however, that contracts are being awarded to their foreign counterparts.

Along with the Shiite Fadhila party, which lost control of the Ministry of Oil in 2006, the companies have launched a campaign against Shahristani.

SOC insists it can fulfil the same objectives set for international companies, and in less time.

"The fields in question represent 85 percent of actual production and 50 percent of reserves," SOC chief executive Fayad Hassan Nima said. "A loss of control would lead to the death of national companies."

Jaber Khalifa Jaber, head of the Iraqi parliament's oil and gas committee and a Fadhila MP, said Iraq is under threat from an "economic occupation".

"The companies will just share the oil between the Americans, the French, the British and the Japanese ... just like the Sykes-Picot agreement," he told AFP, referring to the Anglo-French accord that divided up influence in the Middle East in 1916.

#Iraq to announce oil field contracts after 4 decades
You May Also like: