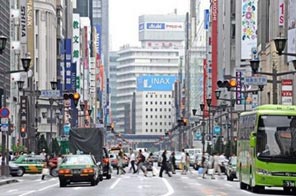 A view of a street at the Ginza shopping district in downtown Tokyo. Japan on Wednesday posted a trade surplus for the ninth straight month in October, as the world's number two economy gradually emerges from deep stagnation, thanks to recovery in the rest of Asia. Source: AFP

TOKYO: Japan posted a trade surplus for a ninth straight month in October as the world's number two economy slowly emerges from its deep slump thanks to recovery in the rest of Asia, according to the latest data.
The trade surplus came to 807.1 billion yen (9.1 billion dollars), a sharp rebound from a deficit of 75 billion yen a year ago amid the sharp global downturn, and the highest level since March 2008, the finance ministry said.
Japanese exports fell at their slowest rate in a year in October, down 23.2 percent from a year ago at 5.31 trillion yen, with sharp declines seen in vehicles and steel products.
The figure was an improvement on September's 30.6 percent decline.
"The main reason behind the strong exports was recovery seen in Asia," said Yoshiki Shinke, a senior economist at Dai-Ichi Life Research Institute.
"Japanese domestic demand is still weak. It's unlikely we'll see a robust recovery in Japan. But we should see a gradual recovery led by exports."
Imports were 35.6 percent below their level of October 2008 at 4.50 trillion yen, in part due to lower energy prices from last year, such as crude oil and liquid natural gas, the ministry said.
Japan, Asia's biggest economy, sank into its worst post-war recession in the second quarter of 2008 as theworldwide economic downturn hammered international demand for its cars, electronics and other exports.
It recovered this year, thanks in part to massive government stimulus spending, and posted a second straight quarter of growth in July-September, when the economy expanded 4.8 percent on an annualised basis.
With Japan's population ageing and shrinking, the country remains dependent as ever on foreign markets to drive growth.
"Japan is clearly participating in the global rebound, and its Asian neighbours in particular are lending it a helping hand," Adrian Foster, Asia head of financial markets research at Rabobank, told Dow Jones Newswires.
Japan's trade activity remained below the level of a year ago but is slowly recovering as the global economy pulls out of the doldrums.
Steps to revitalise overseas economies, including world leader the United States and Asian giant China, should sustain the recovery of Japanese exports, said Takuji Aida, senior economist at UBS Securities.
"With firm demand in China, the export recovery will continue, and we expect net exports will push up Japan's October-December gross domestic product," he said.
Japan's trade surplus with Asia rose 82.3 percent from a year ago to 827.0 billion yen. Exports were down 15.0 percent, but imports dropped by an even steeper 30.0 percent.
However, against China, Japan's biggest trade partner, Tokyo logged its fourth straight monthly trade deficit of 26.2 billion yen.
Japan booked a trade surplus with the United States, but the gap shrank for a 26th straight month, falling 27.7 percent in October to 369.6 billion yen.
Against the EU region, Japan's trade surplus in October fell 40.8 percent to 210.8 billion yen from a year ago, dropping for a 14th straight month.

#Japan posts $9.1 bln trade surplus
You May Also like: