It seems that the liquidity crisis in the banks and financial institutions (BFIs) will further deepen by mid-January as around Rs 40 billion of deposit is set to be withdrawn for the purpose of income tax submission.

BFIs have already been facing acute liquidity crisis after the end of the first quarter and are struggling to maintain loan-to-deposit (LD) ratio at 80 per cent as per the provision of Nepal Rastra Bank. They may face further pressure along with withdrawal of deposits.

As per the financial reports of the commercial banks — class ‘A’ financial institutions — only four banks out of the 28 in operation, namely Rastriya Banijya Bank, Nepal Bank, Standard Chartered Bank and Prabhu Bank have some cushion as they had maintained LD ratio below 75 per cent. 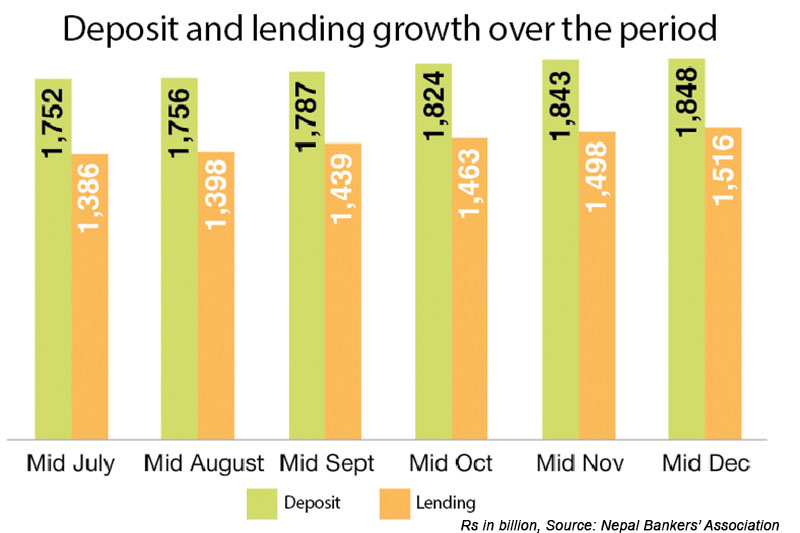 Banks seem to be reluctant to attract more deposits because deposit rate has gone up along with the slowdown in remittances and slow expenditure of the government. “Operation cost of the banks has increased as the interest rate on deposits has gone up and demand for credit has declined along with the interest rate rise in lending,” said Devendra Pratap Shah, CEO of Nepal Bank Ltd.

Simply, demand for credit declines when the interest rate in credit rises but in fact banks are not in a position to float big-size loans as they are passing through acute liquidity crisis and some are offering higher interest rates on deposits only to maintain LD ratio. This will also affect the profit earnings of the BFIs because interest income (on credit) is the major source of income for them.

Many BFIs have been waiting for the moment when they will have to pay low interest on deposits, which could be possible only after the government’s expenditure starts to rise. But the government’s capital

expenditure has been very slow and it spent only Rs 22.88

billion in the first five months of this fiscal out of a total allocation worth Rs 311.95 billion.

KATHMANDU: Depositors losing value of their money in real term due to marginal interest rates on deposits as compared to the higher inflation (almost double digit) since the last few years will be able to expand value of their money through deposits. It is because the interest rate of various fixed deposit schemes offered by banks and financial institutions (BFIs) has finally overtaken the inflation rate. Currently, some of the BFIs have been offering up to nine per cent interest on fixed deposit schemes as they have been passing through a liquidity crisis, which is almost twice the consumer price inflation of the fourth month of this fiscal, which was at a moderate 4.8 per cent.