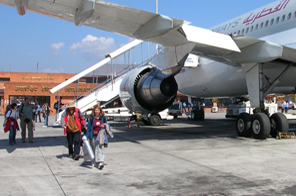 KATHMANDU : The Immigration Office, Tribhuvan International Airport (TIA) data reveal that tourist arrivals in the month of May 2009, compared to the same month last year, decreased to 25,129 — a fall of five per cent. Last year, the number was 26,460.

“Decrease in the number of Indian tourists is normal in May. The actual figures of Indian tourist arrival can be observed increasing during June-July,” said Aditya Baral, spokesperson for Nepal Tourism Board (NTB).

According to Baral, as the season for the Indian tourist is approaching the private sector should now come forward with value-added packages for them Indian tourist adding that NTB is ready to conduct meetings regarding it and develop special packages in coordination.

“Indian tourists come to Nepal mainly for religious visits, so tourism entrepreneurs should make some special packages with attractive incentives in adventure activities and recreational programmes,” said Baral adding that the Indian tourists look for cost-effective options. Talking about the decrease in non-Indian tourist arrivals, Baral said that it is departure time for them and that they will be arriving in the next season.

The SAARC segment showed a 12.7 per cent decline compared to the same month last year. This May, the Indian market — considered a major market — showed a decline of 13.6 per cent. Similarly, arrivals from Bangladesh and Pakistan witnessed negative growth of 4.2 per cent and 17.9 per cent, respectively. Only Sri Lanka registered a positive growth of 19.7 per cent. In the remaining Asian segment, Chinese arrivals increased by 36.2 per cent along with Thailand (87.8 per cent) and Singapore (65.1 per cent). The other markets that decreased were Japan (2.3 per cent), Malaysia (11.4 per cent) and South Korea (23 per cent). Overall, the other Asian markets registered a positive growth of 10.7 per cent. European markets registered

Arrivals from Australia, Canada and United States of America registered positive growth of 7.6 per cent, 8.5 per cent and 4.4 per cent respectively.

China and the UK had upward growth trend. This underscores the fact that both neighbouring and conventional markets are highly important for Nepal. Also, this reflects that the intra-regional market plays an important role in Nepal’s tourism promotion.

#May sees drop in air tourist arrivals
You May Also like: