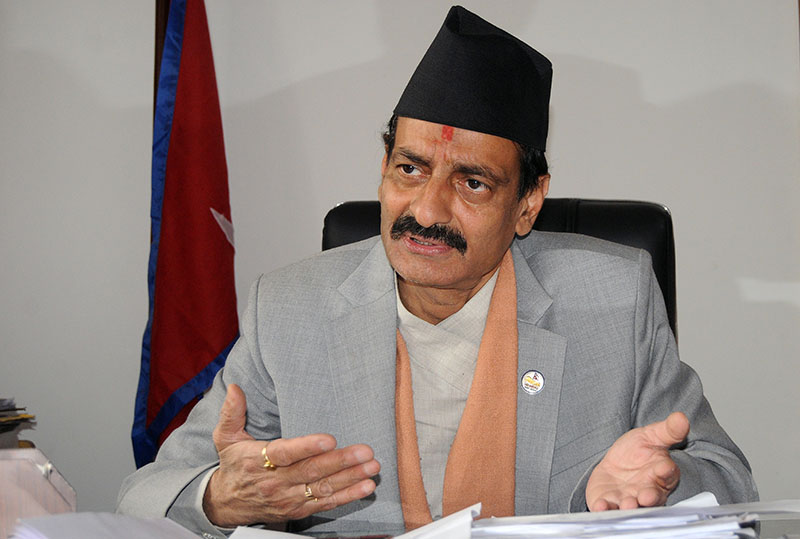 Minister for Industry Nabindra Raj Joshi gives insight into the Nepal Investment Summit 2017, its goals and government’s preparations, in Kathmandu, on Sunday, February 26, 2017. The summmit is scheduled to take palce on March 2 and 3 in Kathmandu. Photo: Balkrishna Thapa Chhetri/THT
Kathmandu, May 11 The Ministry of Industry (MoI) has unveiled various programmes with a target to increase the contribution of the industrial sector in the gross domestic product (GDP) of the country. Minister of Industry Nabindra Raj Joshi, today, announced 18 programmes to be incorporated in the annual budget for fiscal year 2017-18 with an objective to achieve double digit contribution of the industrial sector in the GDP. The industrial sector’s contribution in the country’s GDP is currently less than six per cent. MoI plans to construct cross-border Special Economic Zones (SEZ) in the Nepal-India and Nepal-China borders to promote investment from investors of Nepal, India and China. It has also announced that it will set up Export Promotion Zones in Nepal’s border with India and China to facilitate trade with the two neighbours. Also, MoI has made a proposal to construct single product focused SEZ in the country in the new budget.

“Industrial sector has a huge role to shape the country’s economy,” said Joshi, adding that the upcoming budget will be highly focused on industrial reform and trade enhancement. MoI has also proposed to construct access roads to all major cement factories and mines and minerals industry in the new budget. In a bid to promote women entrepreneurship in the country, the ministry has also proposed to offer investment capital not exceeding Rs 2.5 million to potential women entrepreneurs (in a group) as per their business plan. As per the suggestion of private sector, MoI has also proposed to establish Business Incubation Centre in each province and Industrial Centre for Excellence in Capital within 2017-18. Likewise, MoI has also proposed to construct amusement parks at different places along the Bagmati River in coordination with the private sector. Construction of industrial tower in Tripureshwor and seismic and geo-science tower, distribution of allo production machines, promotion of eye lens producing companies are some of the programmes that MoI has proposed in the new budget. Emphasising the major role of the private sector for industrial growth, Minister Joshi said the government will primarily assure friendly regulatory framework for businesses in the country. Speaking on the occasion, Shankar Koirala, secretary of MoI, claimed that the 2017-18 annual budget will be one of the friendliest budgets for investment and businesses. “As soon as the budget is endorsed, MoI will actively begin to implement all these programmes,” he said. As per the constitutional provision, the Ministry of Finance is gearing up to bring the annual budget for 2017-18 on May 29.
#Ministry of Industry #Nabindra Raj Joshi #MoI #Nepal GDP #Industrial sector GDP contribution
You May Also like: