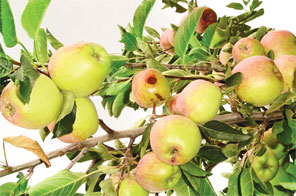 BENI: Apple farmers in Mustang are a worried lot this year too due to lack of transportation services.
Though the road to link the district across the Himalayas was constructed last year, lack of regular transportation service will hinder farmers from taking their harvest to the markets.
Farmers said like in the past over 50 per cent of their harvest will go waste this year as well.
The farmers are forced to transport apples on mules and on their backs to markets in Myagdi, Baglung, Parvat and Pokhara.
This takes the farmers at least three-four days to take the apples to the markets and also damages the apples.
Apples in the orchards are priced at Rs 40 to Rs 50 a kg and Rs 60 in district headquarters Jomsom. The same apples cost Rs 130 to Rs 140 by the time they reach urban centres. Air transportation of apple costs up to Rs 20 a kg. In the 16 VDCs in the district, apple farming is concentrated in eight VDCs.
Last year, the district had produced 4,000 tonnes of apples. This year production is expected to be just half, according to district agriculture development office.
The road linking Beni and Jomsom has been obstructed within four months of construction due to landslide during the rainy season.
Many farmers had sold off their mules after the road construction, but now they are back to square one, said a farmer Mahabir Jwarchan.
Farmers earn a profit of up to Rs 100,000 from apple production every year. Over 400 hectares of land is under apple plantation in the district. Apple farming was launched in the district 43 years ago.

#Mustang apple farmers rue lack of transportation facility
You May Also like: