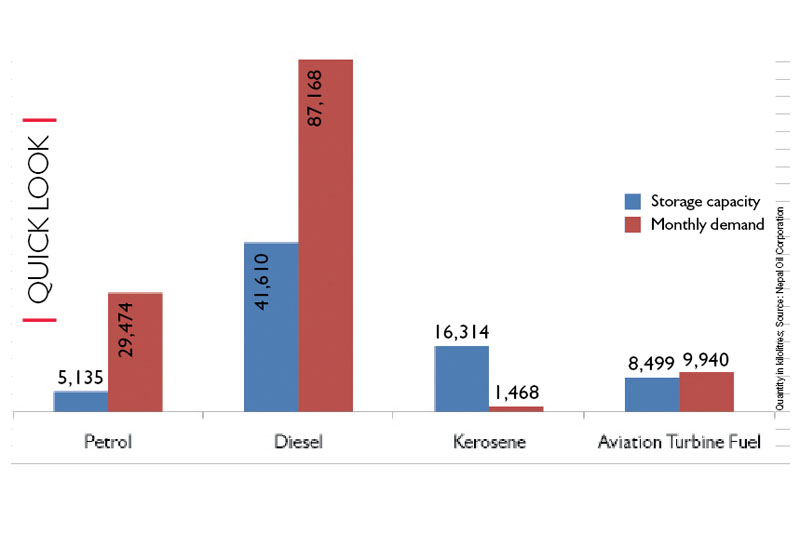 Kathmandu, August 20 Kathmandu Valley started witnessing a shortfall of petrol again as supply from the Raxaul depot — the nearest depot from Nepal — has been temporarily halted since last week for the purpose of tank-cleaning. Nepal Oil Corporation (NOC) has said that it has raised import from Siliguri (Biratnagar) and Gonda (Nepalgunj) to avoid the shortfall in Kathmandu till the Raxaul depot resumes normal supply. However, the serpentine queues of motorists and motorcyclists in front of the fuel stations are proof that NOC’s efforts to manage smooth supply have not been successful. The country has been facing perennial shortage of fuel since long. Even when supply lines are blocked temporarily due to some unavoidable circumstances, fuel supply gets affected. This situation can be blamed on NOC’s low storage capacity. NOC has altogether 10 depots across the country. However, it is NOC’s Thankot depot that caters to the demand in the Kathmandu Valley. The depot was brought into operation around 2000. Back then, the daily demand for petrol stood at around 100 kl. At present, the demand in the Valley has more than tripled and daily consumption hovers around 350 kl petrol. However, the storage capacity of Thankot depot — 1,870 kl petrol — has not been expanded and it is enough to cater to the demand of five days only. NOC Deputy Managing Director Sushil Bhattarai said that petrol tankers have been loaded with around 1,300 kl petrol and will arrive in the Capital by Sunday. The government-owned fuel company can then distribute sufficient petrol to fuel stations, he informed. There is no doubt that NOC will be able to cope with the current shortage after the Raxaul depot starts supplying fuel from this week. But the question that arises is regarding NOC’s inefficiency to manage effective supply and distribution mechanism. After the fuel crisis of last year, the Ministry of Supply as well as the Industry, Commerce and Consumer Welfare Committee of the Parliament had instructed NOC to expand its storage facility. The government had asked the corporation to increase its storage capacity to 415,000 kilolitres from the existing 72,000 kilolitres. However, NOC has not initiated any major process to expand its storage capacity except for converting the kerosene storage tank into a petrol tank. NOC’s profit in the last two fiscal years is expected to hover at around Rs 31 billion, which means NOC has sufficient resources to gradually expand its storage base. On the other hand, NOC has been generating additional revenue of around Rs one billion in a month (based on the fuel purchase rate and consumer prices) by slapping infrastructure development tariff on consumer price. The government has already identified Khaireni of Tanahu, Battar of Nuwakot and Panchkhal of Kavre as possible areas to develop storage facility, but NOC has not even started any feasibility study of the identified places. The government had also asked NOC to develop the storage facility on the sides of mid-hill highway. Birendra Goit, head of the Engineering Department at NOC, said that he corporation is preparing to forward a proposal to its parent ministry seeking government fund to initiate the process of feasibility study as the fiscal budget for 2016-17 has included the programme of developing storage facility.