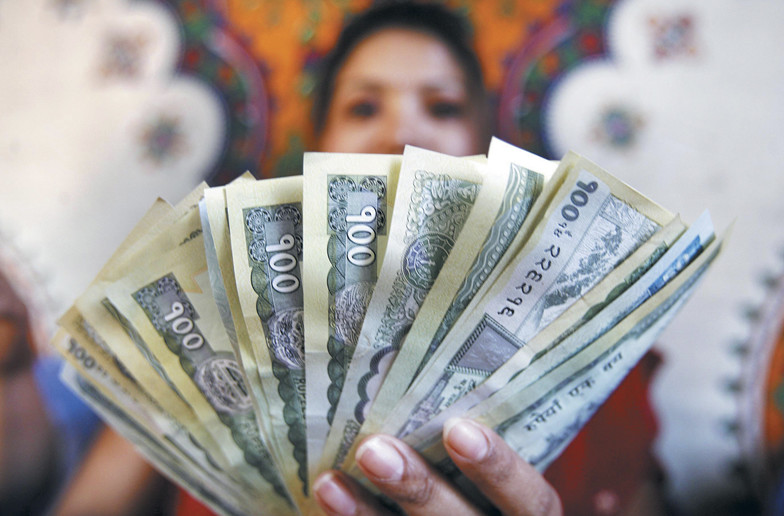 A woman shows notes she received after putting tika from elders, on the occasion of Dashain, in Kathmandu. Photo: THT/ File
Kathmandu, February 16 Nepali rupee has plunged to fresh all-time low against the US dollar, as Indian currency came under pressure after investors started dumping Indian assets. Nepali rupee, which closed at 109.30 against the greenback today, will lose 47 paisa by the time markets open on Wednesday to trade at 109.77, reference rate of Nepal Rastra Bank shows. This is the first time rupee had plunged to this level. The last time the currency had hit a historic low was on February 11, when the value of rupee had tumbled to 109.48 per dollar. Nepali rupee's rise and fall depends on the movement of the Indian currency because Nepali rupee is pegged to Indian rupee at 1.6. Today, Indian currency opened at 68.14 per dollar and closed at 68.38, the lowest since August 28, 2013. Indian rupee fell today as foreign investors sold Indian shares and bonds. Foreign holdings of Indian rupee-denominated debt have fallen by INR 26 billion in last five trading days, Bloomberg said, while stocks have seen withdrawals of $2.3 billion this year. "Foreign inflows have stayed negative for both debt and equities, which is adding pressure on the Indian rupee," Bloomberg quoted Rohan Lasrado, head of foreign-exchange trading at RBL Bank in Mumbai, as saying. "We are keenly watching local stocks to assess the direction of the currency."
#Nepal Rastra Bank (NRB) #US dollar #Nepali rupee #Indian assets
You May Also like: