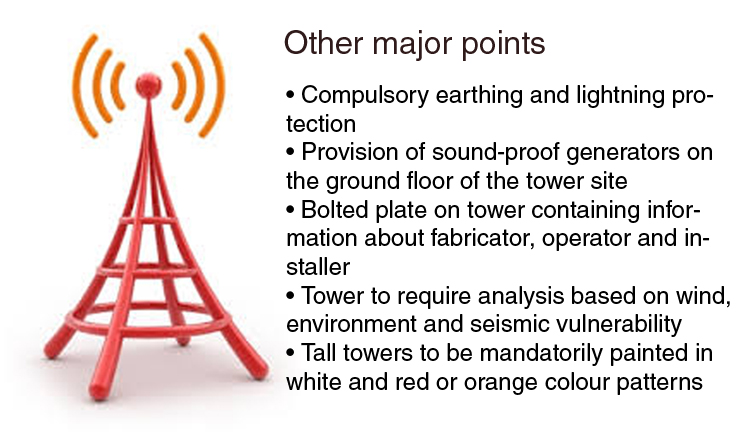 Telecom companies will soon have to be more careful while installing mobile towers. The government is all set to implement a guideline that requires mandatory third-party insurance and installation of rooftop towers only on houses that have followed the building code.

After a long preparation, the directive has been approved by Nepal Telecommunications Authority (NTA) and is presently awaiting the final go-ahead from the Ministry of Information and Communications (MoIC). As per the draft directive on 'Erection of Telecommunication Antenna Structures/Tower', it will be mandatory for telecom service operators to obtain approval from NTA to set up towers.

No telecom structure that is more than seven metres tall will be constructed without receiving an approval letter from NTA, according to the draft. It has talked of avoiding constructing towers as much as possible in residential areas, near schools and hospitals, and setting up an emergency response mechanism to provide continuous communication service during disasters. For towers that are more than 30 metres tall, companies will have to take permission from the Civil Aviation Authority of Nepal too.

Similarly, the draft has stated that the design, construction, and installation of large-size towers will be required to have the capacity to accommodate a minimum of three service providers for infrastructure sharing. The guideline has a provision of imposing a penalty of Rs 500,000 by NTA if companies fail to meet the required standards while installing towers.

As of now, telecom companies have been installing towers as per their need and there is no mandatory provision of third-party insurance. “Provision of third-party insurance has been made mandatory for possible human injury or damage to property if towers collapse due to a natural disaster or while they are being dismantled,” said an official of NTA. As per the directive, companies will be required to assess the risk vulnerability of towers, including Earthquake Risk Assessment at regular intervals as specified by the authority.

NTA officials said that even though the guideline has talked of discouraging setting up towers on residential houses, telecom companies will be able to erect towers atop structures built as per the Nepal Building Code (NBC). To erect towers on the rooftops of residential buildings, careful design and construction norms and standards must be taken into account.

If towers are installed on buildings that were constructed before 1998, such structures will have to be assessed and certified in terms of compliance to NBC. According to the draft, prior to designing any tall tower on a rooftop, structural integrity of the building must be observed very carefully. Structural drawings of the building will be checked to determine what further structural works would be required to accommodate additional heavy loads.

Going by the existing provision, the Telecommunications Infrastructure Promotion Committee, under the coordination of MoIC, is responsible for issuing permits to build towers that are more than seven metres tall. However, since the committee has not held a single meeting despite its formation three years ago, NTA in the guideline has included a rule which states that companies must take its permission to build towers.