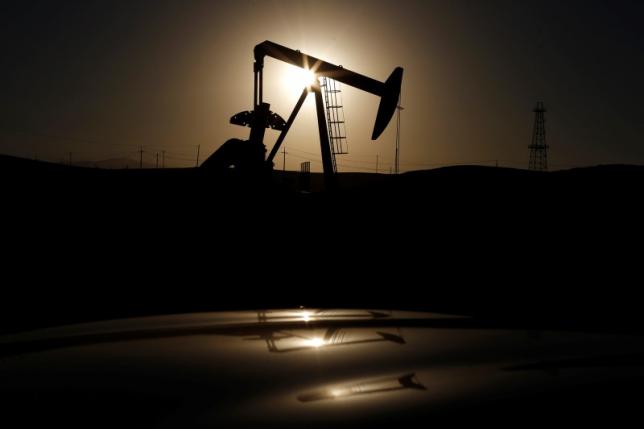 A pump jack is seen at sunrise near Bakersfield, California October 14, 2014. REUTERS
SINGAPORE: Oil prices rose in Asian trade on Friday, setting crude futures on course for one of their biggest weekly gains this year, as sentiment has become more upbeat despite ongoing oversupply. International benchmark Brent crude futures were trading at $45.09 per barrel at 0054 GMT, up more than half a dollar from their last settlement. US West Texas Intermediate (WTI) crude was up 52 cents at $43.70 a barrel. With Brent up 8 percent since Monday and WTI 12 percent higher since April 18, this week is set for some of the steepest price rallies so far this year, and crude is up by more than two-thirds since its 2016 lows between January and February. Traders said that sentiment in the entire commodity complex had turned more confident, with new cash being put into the market by investors, lifting prices. Another factor has been producers taking advantage of higher prices by locking in production. "We would expect producers in the US taking every opportunity to aggressively hedge as soon as there is opportunity when oil prices recover for short periods of time," French investment bank Natixis said. Falling output, especially in the United States, where many producers are shutting down following an up to 70 percent price rout since 2014, is also helping to lift the market. Natixis said it expected US oil production to drop by at least 500,000 to 600,000 barrels per day (bpd) this year, compared with 2015, and by another 500,000 bpd in 2017. Despite the recent rally, oil markets remain oversupplied as between 1 and 2 million barrels of crude are being pumped out of the ground every day in excess of demand, leaving storage tanks around the world filled to the rims with unsold fuel.
#United States #oil #Asian trade
You May Also like: