Oil rises to above $69 as investors weigh outlook 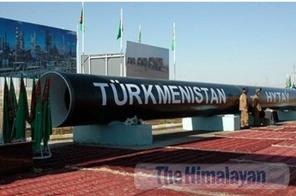 Symbolic first piece of a gas pipeline to China outside of the city Turkmenabat, seen here in 2007. A new 7,000-kilometre (4,350-mile) gas pipeline linking Turkmenistan to China is due to be completed by 2009. Source: AFP/File

Oil prices rose to above $69 a barrel Tuesday as traders brushed off concerns that the doubling of crude prices since March is out of step with a weak global economy.

Prices also benefited from investors looking for a safe haven in commodities as the U.S. dollar lost ground against other major currencies.

Benchmark crude for July delivery was up $1.23 to $69.32 a barrel by mid-afternoon in Europe in electronic trading on the New York Mercantile Exchange. On Monday, it fell 35 cents to settle at $68.09.

Oil prices have joined a surge in equity markets on investor optimism that the worst of a global recession is over. Crude touched above $70 a barrel last week, the highest since October.

However, crude inventories remain near 19-year highs and demand in the U.S., the world's largest consumer of oil, is sluggish.

"There continues to be some economic optimism out there," said Victor Shum, an energy analyst at consultancy Purvin & Gertz in Singapore. "Investors have brushed aside any near-term concerns about the weak oil market fundamentals."

Wednesday's release of petroleum inventory data from the Energy Department's Energy Information Administration could provide some insight about crude demand. Analysts expect a rise of 800,000 barrels, according to a survey by Platts, the energy information arm of McGraw-Hill Cos. Stocks unexpectedly rose last week after dropping the previous three weeks.

Traders were also eyeing the U.S. dollar, as a weaker American currency would bolster prices and investors often look to commodities such as crude as a hedge against inflation.

Olivier Jakob of Petromatrix in Switzerland noted that oil prices had been unusually stable so far in June, with daily closing prices mostly within a narrow range around $68.50.

"Such extreme stability never stays for an extended period of time and is usually concluded by a volatility breakout from the range," Jakob said. "That would be either below $66 or above $70 a barrel ... and given the latest market dynamics we will have a bias towards the upside breakout."

#Oil rises to above $69 as investors weigh outlook
You May Also like: