Oil slips below $68 in Asia 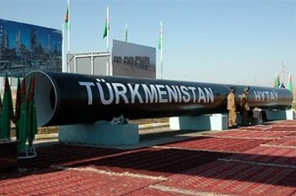 Symbolic first piece of a gas pipeline to China outside of the city Turkmenabat, seen here in 2007. A new 7,000-kilometre (4,350-mile) gas pipeline linking Turkmenistan to China is due to be completed by 2009. Source: AP

BANGKOK: Oil prices slipped below $68 Monday in Asia as a rally that has roughly doubled the price of crude in four months lost some steam in the face of economic reality.

Benchmark crude for July delivery was down 49 cents at $67.95 a barrel by midday Bangkok time in electronic trading on the New York Mercantile Exchange. On Friday, It settled down 37 cents at $68.44 after jumping as high as $70.32, the highest since October.

Crude prices have risen in tandem with global stocks as gloom about the global economy eased but many analysts say the oil market is overreaching.

Inventories of petroleum and natural gas continue to rise, the global economy remains mired in recession even if there are signs the worst is over, and consumers are driving less or abandoning big gas-guzzling vehicles for more fuel-efficient models.

"I don't see the rally that we've had over the last couple of months as being sustainable," said John Vautrain, energy analyst at consultancy Purvin & Gertz in Singapore. "Inventories are still growing and OPEC production cuts haven't been big enough to offset that," he said. "The major economies are still weak and we are still losing demand."

Oil's brief jump over $70 came after a U.S. Labor Department reported Friday that employers cut 345,000 jobs in May, the fewest since September.

However, the unemployment rate rose to 9.4 percent in May, the highest in more than 25 years. One of the reasons that retail gasoline costs have fallen in the U.S. is because layoffs mean fewer people are commuting to work.

But some analysts have been quick to jump on the crude rally bandwagon, with Goldman Sachs last week predicting that oil would reach $85 by the end of the year.

Vautrain said he expects the price to slacken in the third quarter with prices averaging $50 to $55 a barrel for the year.

In London, Brent prices lost 49 cents to $67.85 a barrel on the ICE Futures exchange.

#Oil slips below $68 in Asia
You May Also like: