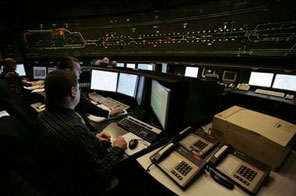 File photo of the Eurotunnel control room in Folkestone, Kent. The government will sell off a raft of state assets, Prime Minister Gordon Brown was to say Monday as he bids to reclaim the initiative on reducing recession-hit Britain's debt. Source: AFP

LONDON: The British government will sell off a raft of state assets, Prime Minister Gordon Brown was to say Monday as he bids to reclaim the initiative on reducing recession-hit Britain's debt.
The government is to sell off 16 billion pounds (25.4 billion dollars, 17.2 billion euros) of assets, Brown was to say, according to extracts from a keynote speech to be given London, setting out his vision for "enduring and sustainable growth."
Brown was to outline details of initial sales that could raise three billion pounds, including the Channel Tunnel linking Britain to France; the 33 percent stake in European uranium corsortium URENCO; the Tote bookmakers; the River Thames crossings at Dartford, east of London; and the Student Loans Company.
Britain is still in recession and has a forecast deficit this year of 175 billion pounds.
The main opposition Conservatives, who are well ahead in the opinion polls with a general election due by June, set out their plans last week for tackling Britain's debt problem.
Brown is aiming to halve Britain's deficit over the next four years and is bidding to reclaim the initiative for his governing Labour Party.
"We also need a deficit reduction plan that supports growth and jobs, not one that snuffs out recovery before it has started," Brown was to say.
The government will also sell off surplus real estate as market conditions improve.
In a clear dig at the Conservatives, Brown was to attack their plans for dragging Britain out of recession.
He was to say: "A vital contributor to sustainable public finances is growth. Restoring public finance sustainability must be done in a way that supports growth not destroys it. The failure to do so is the real risk of a lost decade of austerity.
"A reduction in growth of one percent next year would raise the deficit by half a percent next year and even more in subsequent years, adding to the future debt burden.
"The resulting impact on the debt burden could be more than five percent of gross domestic product after 10 years."
A Conservative spokesman said: "As any family knows, selling off things helps in the short-term and, given the state the country is in, is probably necessary but it is no substitute for a long-term plan to get the country to live within its means."
Meanwhile Brown said he would propose a "new European strategy for growth and jobs" when European Union leaders meet in Brussels on 29-30 October, saying the continent's economies needed restructuring.
"Britain will push to step up work on an EU-Indian trade deal and seek a rapid conclusion of talks on an EU-Korean trade deal which alongside our ambition to increase exports to China and the rest of Asia could be worth billons to the UK," he was to say.
"We will also push for further action to reduce barriers to trade in services within the EU itself.
"Britain must also use all its influence in Europe to ensure that an outward-looking EU is part of the solution to the world's economic challenges, not part of the problem."
Brown was also to pledge to "intensify our attack on tax evasion and tax havens," and launch a new drive to boost apprenticeships in a bid to enhance the skills base of the British workforce.

#Recession-hit Britain to sell off state assets: PM
You May Also like: