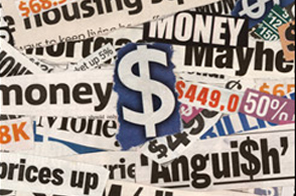 NEW YORK: Regulators on Friday shut down five small banks, boosting to 45 the number of failures this year of federally insured banks. More are expected to succumb in the prolonged recession.
The Federal Deposit Insurance Corp. was appointed receiver of the failed banks: Community Bank of West Georgia, based in Villa Rica, Ga.; Neighborhood Community Bank, located in Newnan, Ga.; Horizon Bank in Pine City, Minn.; MetroPacific Bank in Irvine, Calif.; and Mirae Bank in Los Angeles.
Community Bank of West Georgia had $199.4 million in assets and $182.5 million in deposits as of May 15. Neighborhood Community Bank had $221.6 million in assets and $191.3 million in deposits as of March 31. Horizon Bank had $87.6 million in assets and $69.4 million in deposits as of March 31. MetroPacific Bank had $80 million in assets and deposits of $73 million as of June 8. Mirae Bank had $456 million in assets and $362 million in deposits as of May 29.
The two closures in Georgia brought to 14 the number of banks in Georgia that have failed since the beginning of last year, more than in any other state. Most of the failures have involved banks in the Atlanta area, where the collapse of the real estate market brought economic dislocation.
CharterBank, based in West Point, Ga., agreed to assume all of the deposits of Neighborhood Community Bank and to purchase about $209.6 million of the assets; the FDIC will retain the remaining assets for later disposition. Neighborhood Community's four offices will reopen as branches of CharterBank.
The FDIC said it will mail checks to Community Bank of West Georgia depositors for the amounts of their insured funds. Direct deposits from the government, such as Social Security and veterans' benefits, will be transferred to United Community Bank in Blairsville, Ga.
All of the deposits at Horizon Bank will be assumed by St. Cloud, Minn.-based Stearns Bank NA. Stearns Bank also agreed to purchase $84.4 million of Horizon Bank's assets. The FDIC will retain the remaining assets for later disposition. Horizon Bank's two offices will reopen Saturday as branches of Stearns Bank, and customers accounts will automatically be transferred to Stearns Bank.
Nearly all of MetroPacific Bank's deposits will be assumed by Tustin, Calif.-based Sunwest bank. Only about $6 million in brokered deposits will not be absorbed by Sunwest. The FDIC will pay brokers directly for the amount of those funds. Virtually all of MetroPacific Bank's assets are being purchased by Sunwest Bank. MetroPacific Bank's lone office will reopen Monday as a branch of Sunwest Bank. Deposits will be automatically transferred to Sunwest Bank.
Los Angeles-based Wilshire State Bank will assume all of Mirae Bank's deposits and $449 million of its assets. The remaining assets will be retained by the FDIC for later disposition. Mirae Bank's five offices will be reopened Monday as branches of Wilshire State Bank.
The 45 banks closed nationwide this year compare with 25 in all of 2008 and three in 2007.
The FDIC estimates that the cost to the deposit insurance fund from the failure of Community Bank of West Georgia will be $85 million. CharterBank's failure will cost the fund $66.7 million. The failure of Horizon Bank is expected to cost the fund $33.5 million, while the closure of MetroPacific Bank will cost the fund about $29 million. Mirae Bank's failure will cost the fund $50 million.
As the economy has soured, with unemployment rising, home prices tumbling and loan defaults soaring, bank failures have cascaded and sapped billions out of the deposit insurance fund. It now stands at its lowest level since 1993, $13 billion as of the first quarter.
While the pounding from losses on home mortgages may be nearing an end, delinquencies on commercial real estate loans remain a hot spot of potential trouble, FDIC officials say. If the recession deepens, defaults on the high-risk loans could spike. Many regional banks hold large numbers of them.
The number of banks on the FDIC's list of problem institutions leaped to 305 in the first quarter — the highest number since 1994 during the savings and loan crisis — from 252 in the fourth quarter. The combined assets of those banks rose to $220 billion from $159 billion.
The FDIC expects U.S. bank failures to cost the insurance fund around $70 billion through 2013. The agency recently adopted a new system of emergency fees paid by U.S. financial institutions that shifts more of the burden to bigger banks to help replenish the fund.
Congress has more than tripled the amount the FDIC may borrow from the Treasury Department if needed to restore the insurance fund, to $100 billion from $30 billion.
Government "stress tests" of the 19 biggest U.S. banks last month showed that 10 of them had to raise a total of $75 billion in new capital to withstand possible future losses.
A key government effort to ease the credit crisis reached a milestone on June 17 as 10 large banks said they had repaid a total of $68 billion in federal bailout funds.
The Obama administration on Friday established its process for pricing billions of dollars worth of warrants that large banks must repurchase to exit the $700 billion bailout program.
In addition to the $68 billion in bailout funds repaid by the 10 large institutions, another $2 billion has been repaid by smaller banks.
The closing last month of struggling Florida thrift BankUnited FSB is expected to cost the insurance fund $4.9 billion, the second-largest hit since the financial crisis began. The costliest was the July 2008 seizure of big California lender IndyMac Bank, on which the insurance fund is estimated to have lost $10.7 billion.
The largest U.S. bank failure ever also came last year: Seattle-based thrift Washington Mutual Inc. fell in September, with about $307 billion in assets. It was acquired by JPMorgan Chase & Co. for $1.9 billion in a deal brokered by the FDIC.