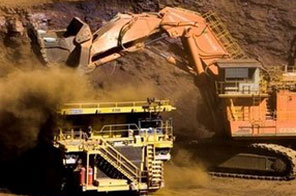 A truck is loaded with iron ore at a Rio Tinto-owned mine in Western Australia's Pilbara region. The Anglo-Australian mining giant has said it is interested in collaborating with Chinalco, months after rejecting a massive cash injection from the state-owned Chinese firm. Source: AFP

SYDNEY: Anglo-Australian miner Rio Tinto said Tuesday it was interested in collaborating with Chinalco, months after rejecting a massive cash injection from the state-owned Chinese firm.
Rio chief executive Tom Albanese also said the company hoped for a "timely and transparent resolution" of the case against top executive Stern Hu, who was arrested weeks after the 19.5 billion US dollar tie-up collapsed.
"We are still keen to work with Chinalco in future on projects of mutual benefit," Albanese told a conference in Perth.
"It is too early to say what these might be but I am encouraged that we have had some recent engagement," he added.
"We want the underlying common interests between Rio Tinto and China to once again drive us towards ever-deepening co-operation."
Rio snubbed Chinalco's offer in favour of a joint venture in Western Australia with bitter rival BHP Billiton in June. Albanese said a binding agreement was expected by December 5.
In July, the arrest of Australian passport-holder Hu and three of his colleagues amid fraught iron ore contract talks also drove a wedge between Canberra and Beijing.

#Rio Tinto wants to work with Chinalco: chief
You May Also like: