Rs 507 million worth of crops, livestock affected due to windstorm: Report 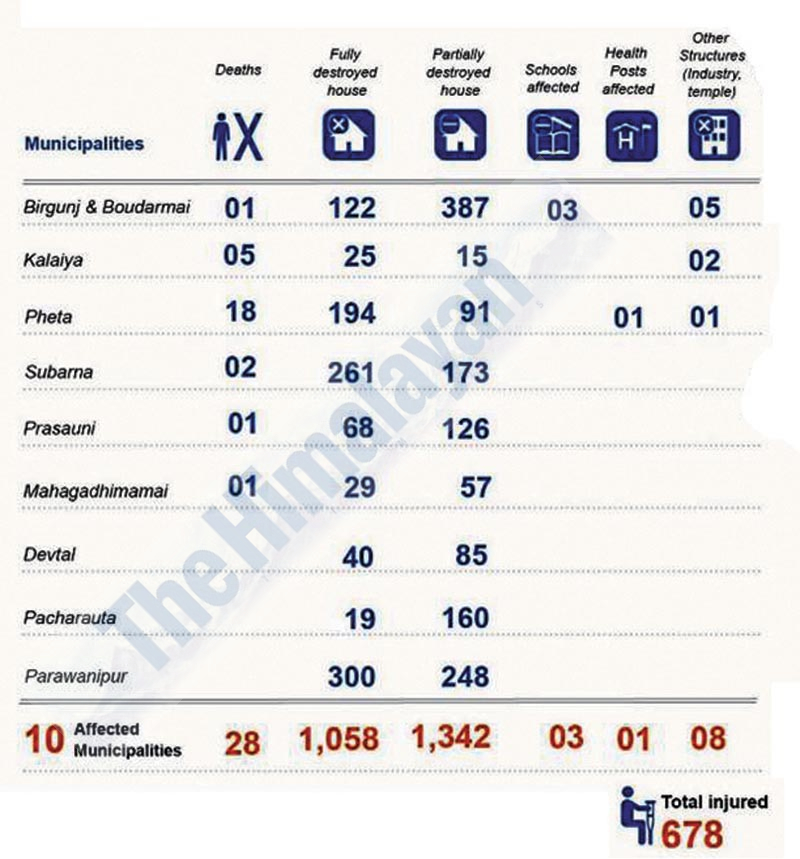 The devastating windstorm that hit several villages in Bara and Parsa districts last week affected (partially and fully) agricultural crops and livestock worth over Rs 507 million, as per a government report.

Following the devastation, the Ministry of Agriculture and Livestock Development (MoALD) had formed a committee to identify the agricultural and livestock loss in the affected areas. The committee submitted its report to Agriculture Minister Chakra Pani Khanal today.

As per the report, the windstorm, which was later identified as tornado, affected cultivated crops (including vegetables and fruits) worth Rs 500 million and livestock worth Rs 7.5 million in the two districts.

Similarly, the report states that the windstorm affected crops and fruits cultivated on 241 hectares of land in Bara and on 1,727 hectares in Parsa.

In the agricultural front, the windstorm primarily damaged wheat, maize, vegetables and lentils in Bara and Parsa.

As it is the harvesting season of wheat in Tarai, the windstorm primarily affected wheat that was ready for harvest. While the disaster affected wheat planted on 2,781 hectares in the two districts, it damaged maize planted on 513 hectares.

Likewise, the windstorm also destroyed vegetables across 323 hectares of land in Bara and Parsa.

The report has suggested the government to support affected farmers in cultivation of rice and vegetables next spring and support farmers in acquiring seeds, fertilisers and other micronutrients.

Similarly, the report has also recommended the government to provide additional subsidy to affected farmers in crop insurance through the provincial government.

The report has urged the government also to begin vaccination programme for livestock along the affected areas in Bara and Parsa.

Vijay Chandra Jha, secretary at the Ministry of Land Management, Agriculture and Cooperatives (MoL- MAC) of Province 2, said that the government will soon launch various programmes targeted to support the affected farmers.

#crops destroyed #windstorm #Bara-Parsa disaster #Following the devastation #the Ministry of Agriculture and Livestock Development (MoALD)
You May Also like: